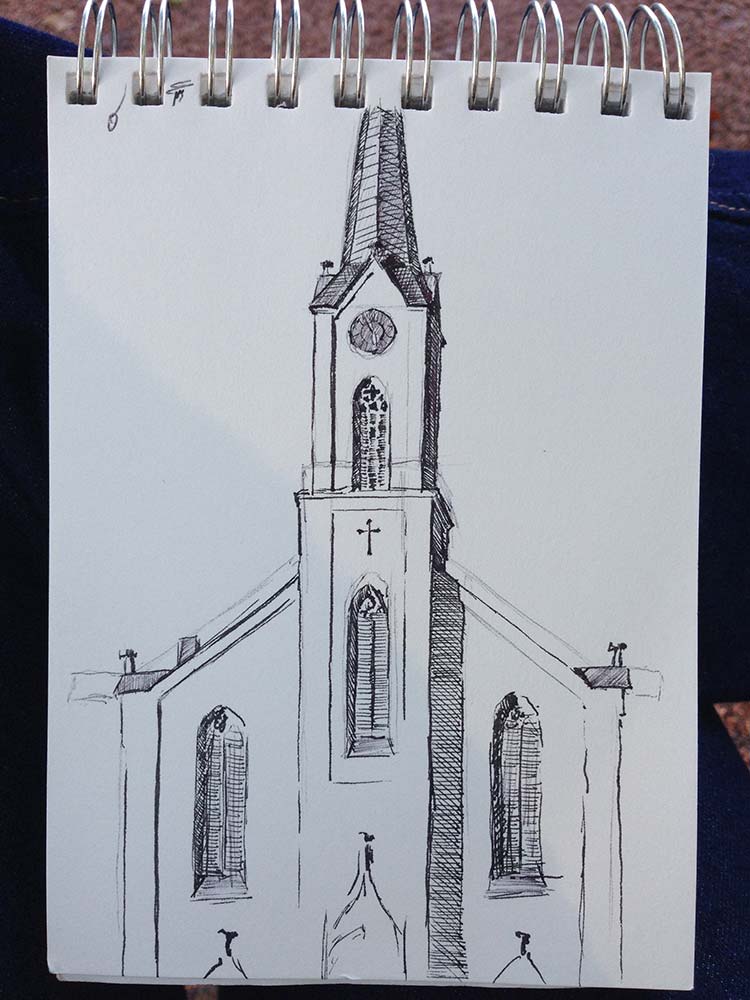 Today we docked in Kehl Germany where we took an excursion thru Strasbourg France and eventually to the Strasbourg Cathedral, also known as Cathedral Notre Dame Strasbourg. It was a rainy day but regardless the streets of Strasbourg with its half timbered houses was beautiful. Here you can see our group and our tour guide next to one of the small water ways in “Little France”. 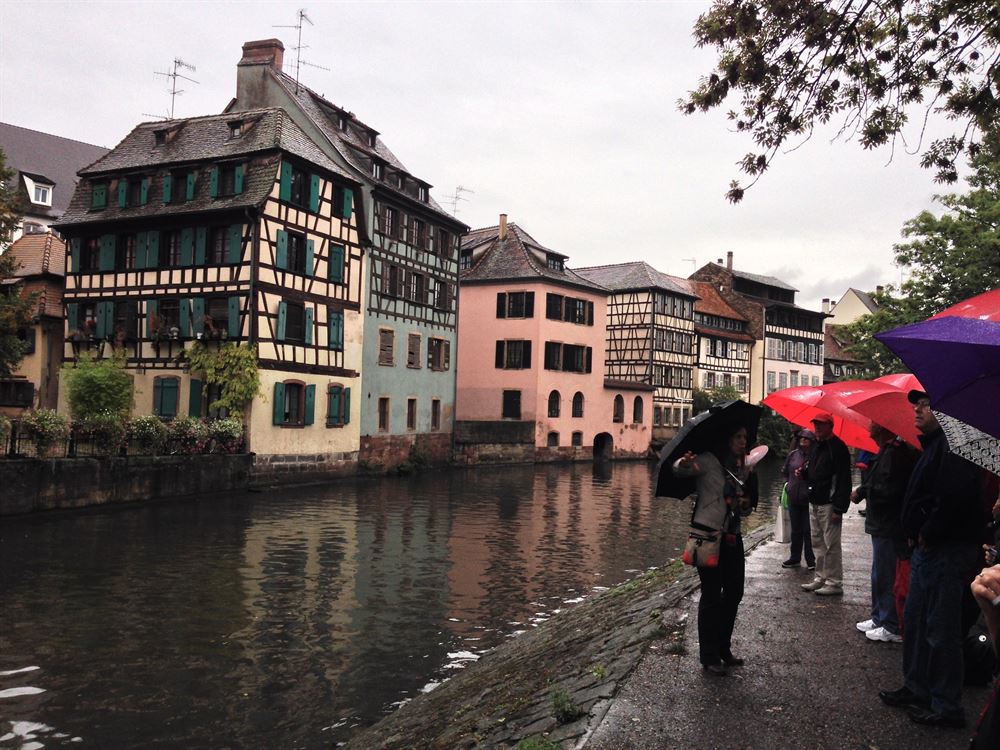 At the end of our tour we come to the most imposing site of the city, Strausbourg Cathedral. This cathedral was massive and towered above everything, their were a ton a sculpted elements surrounding the exterior of the building including figures, gargoyles and many gothic elements.

Strasbourg Cathedral Roman Catholic cathedral and although considerable parts of it are still in Romanesque architecture, it is widely considered to be among the finest examples of high, or late, Gothic architecture.

At 142 metres (466 feet), it was the world’s tallest building from 1647 to 1874 (227 years), when it was surpassed by St. Nikolai’s Church, Hamburg. Today it is the sixth-tallest church in the world and the highest extant structure built entirely in the Middle Ages.

During our rhine river cruise we have been going through a series of locks and each one has lowered the ship down to the next lowest area of the rhine river. By the end of our journey we will have descended twice the height of this church, around 900 feet. 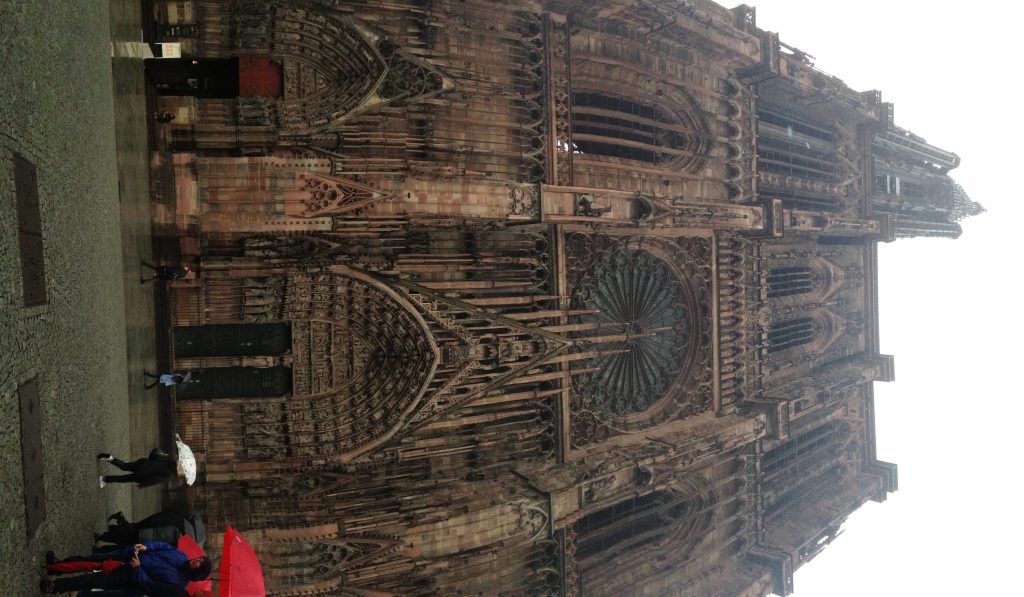 Much like St Martin’s church in Colmar France the second spire of this Cathedral was not finished. I’m not sure if it was due to weight of the structure or lack of funds to complete it. But it doesn’t matter too much the cathedral was still magnificent. 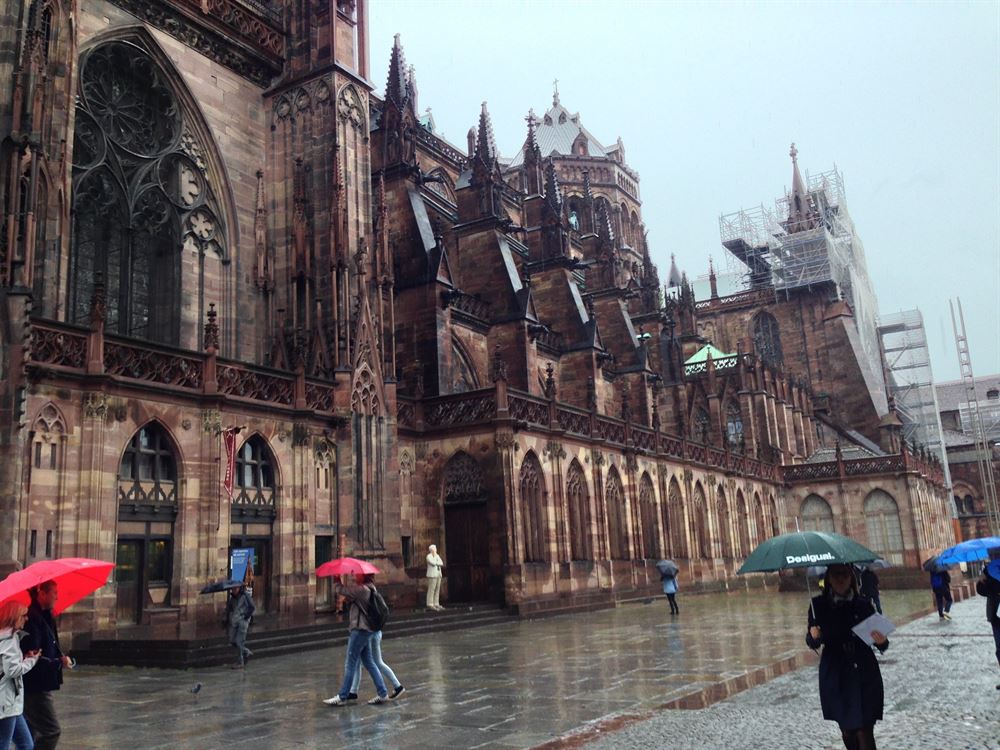 Here is a good shot of the right side of the cathedral with its flying buttresses which are another character-defining feature of medieval Gothic cathedrals.

The interior of the church was amazing. Here you can see a vertical panoramic shot I took of the interior with its huge pipe organ about 40 feet up the side of the cathedral. 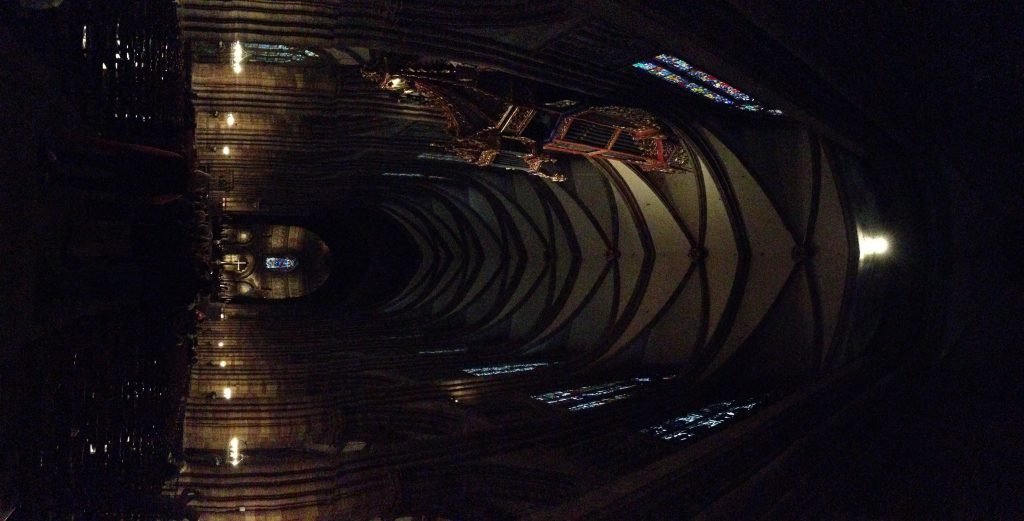 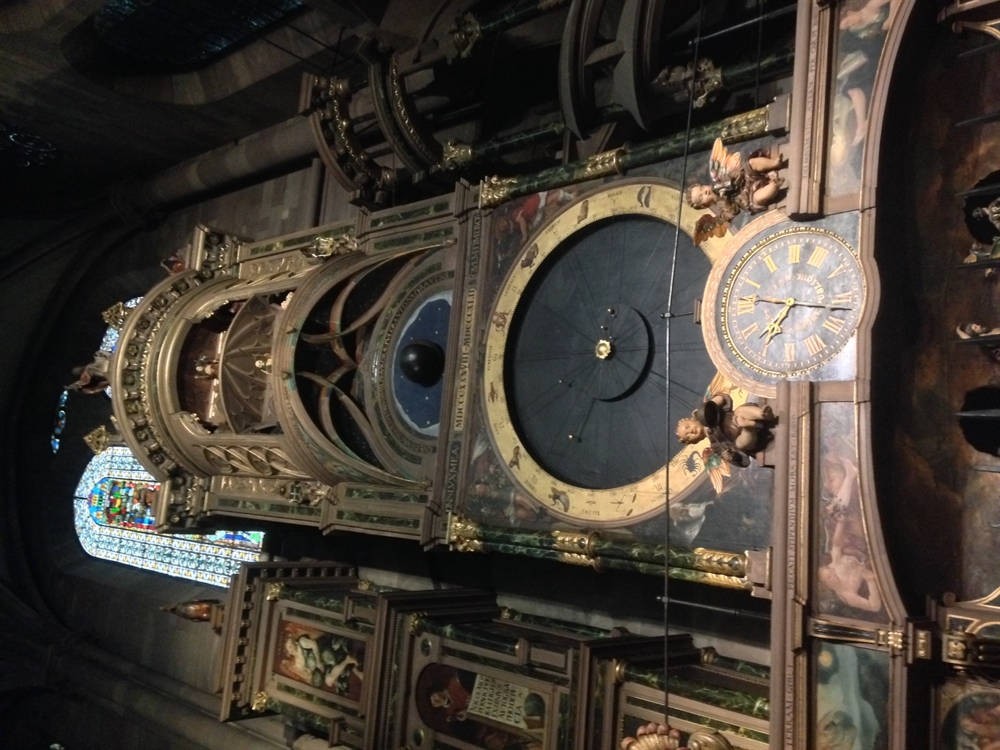 The astronomical clock is unusually accurate; it indicates leap years, equinoxes, the position of planets, the phases of the moon, and a ton of other data.  The clock was able to determine the date of Easter in the Christian calendar at a time when computers did not yet exist. Easter had been defined at the First Council of Nicaea in A.D. 325 as “the Sunday that follows the fourteenth day of the moon that falls on March 21 or immediately after”.

There are animated characters that launch into movement at different hours of the day. One angel sounds the bell while a second turns over an hourglass. Different characters, representing the ages of life (from a child to an old man) parade in front of Death. On the last level are the Apostles, passing in front of Christ. The clock shows much more than the official time; it also indicates solar time, the day of the week (each represented by a god of mythology), the month, the year, the sign of the zodiac, the phase of the moon and the position of several planets. All these automatons are put into operation at 12:30 PM.

Here you can see the last stage of the clock with the old man marching past death after he chimes a bell, then death chimes the bell after him.

After our long excursion in Strasbourg France we returned to the ship for lunch. Afterwards we walked off the ship and into Kehl Germany where we all walked around Kehl for a couple hours, through parks and city streets seeing the sites.

At the end of our walk Pattie and I returned to the center of the city and I did a sketch of the Kehl Germany chruch while Pattie did some shopping. 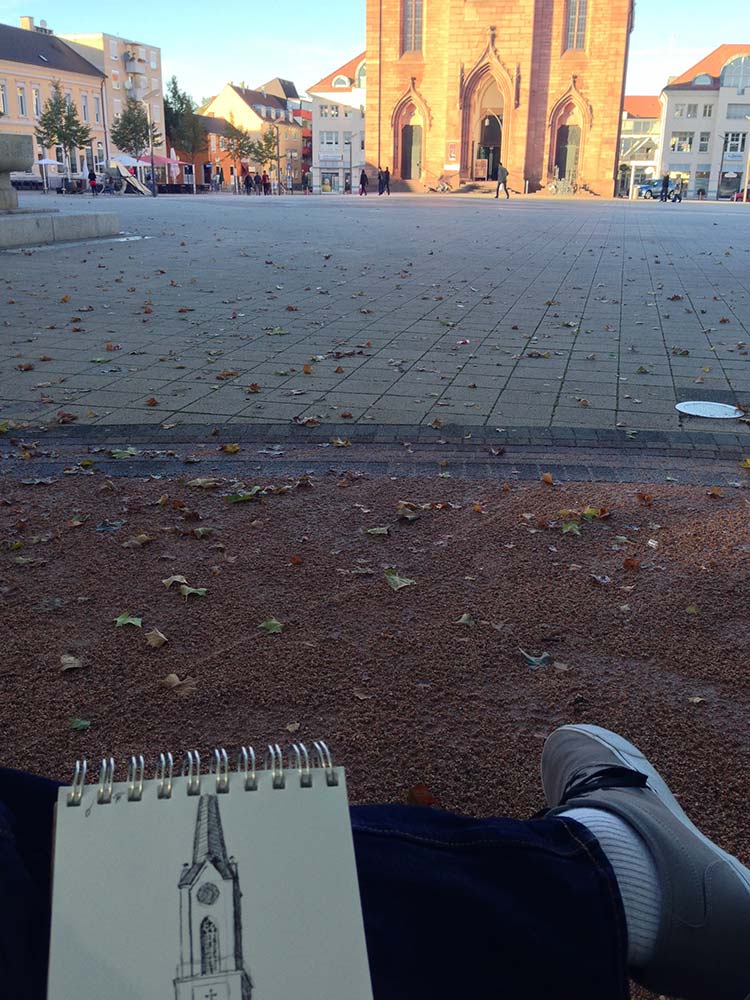 A very nice church and I was happy that the rain had stopped and the sun came out. I found a nice spot under a tree and drew for an hour. The only issue was that the tree that I was sitting under was dropping tiny little spiders on me, I’m glad they were very small or else I would have fled. 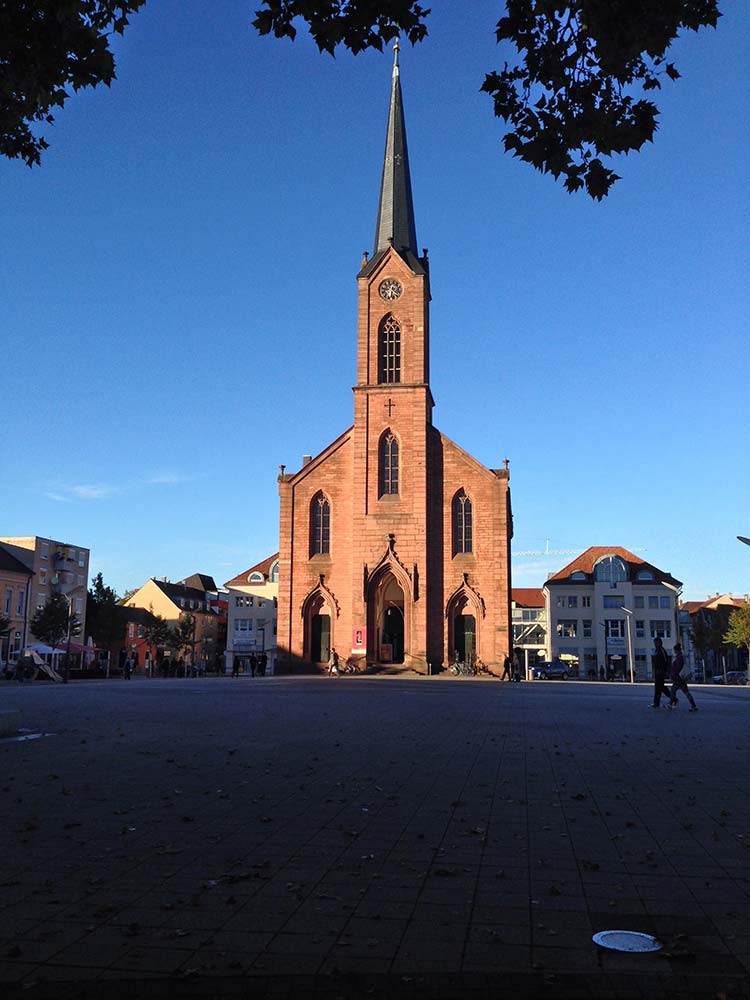