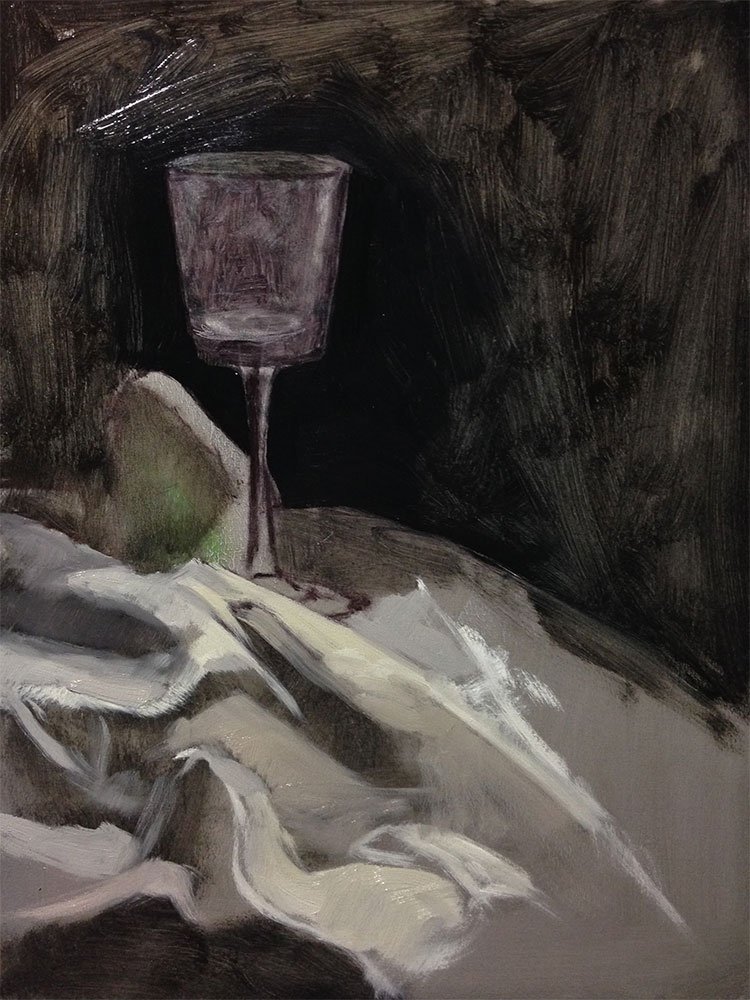 I couldn’t take it anymore, after working on this painting for two hours I wasn’t any further along then when I started. I was so frustrated with my progress that I decided starting over was best. I almost quit on the painting entirely, but I convinced myself that it was a worthy subject, all I needed was a fresh look at it, or maybe something a bit easier.

It’s hard to admit my short comings but painting a green glass in front of a brownish yellow drapery was too much for me. I was having so much trouble dealing with the drawing of the glass plus the subtle transitions of value and hue through it that I became very agitated.

I started today’s session by trying to re-draw the glass for a third time. I was thinking that I could save some time and use one of the pictures I took of the still life to make the drawing easier. Sadly, I will admit, I traced the photograph… Boy was that a mistake. I thought it would be easier, I could get an exact drawing down on the canvas quickly and worry about nothing but getting those darn values and hues right. It didn’t turn out that way at all.

Here you can see where I was scratching the new drawing into the board, and where I have covered up the drawing of the glass with 2 hours of work. It just looked bad, and I didn’t think the drawing was well done either. The interesting thing about it is that after doing the tracing I wasn’t “seeing” anymore. It’s hard to explain but I wasn’t focused on looking, evaluating, then executing. It seems as though the tracing of the drawing made me lazy, I figured I could just lean on its supposed correctness and not worry about drawing anymore. This led to nothing but bad drawing and even worse rendering.

Starting Over With a Small Change

So I started over, I made a simple change to the still life by removing the drapery in the background and going for all black. Yeah, it’s a bit of a cop out but at least I’m not quitting. It actually felt good to wipe out the painting, it relieved a lot of my frustration.

After only 30 minutes of work on this “new” painting I’m very satisfied with it’s direction. It may just be the absence of the brown drapery, or maybe it’s more of a mental change in myself, I’m not sure. But I still have motivation to continue on and that is what really counts.

I’ll break this down into simple points for my future self.