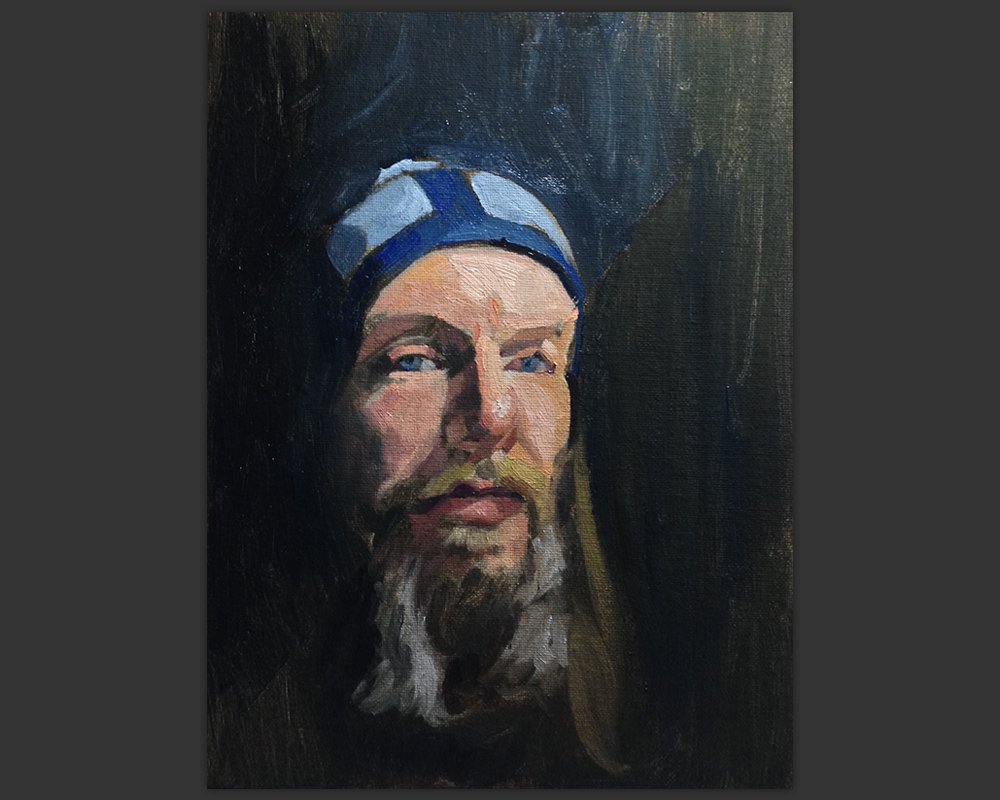 So the idea is this, at some point I will need to use photo references to paint from and I dislike the idea. I always paint straight from life because it is better training, it gives you more information about your subject and it forces you to see. So, I figure the best solution is to study how photos change a subject so I can understand the differences when I must paint from them and change my approach accordingly. 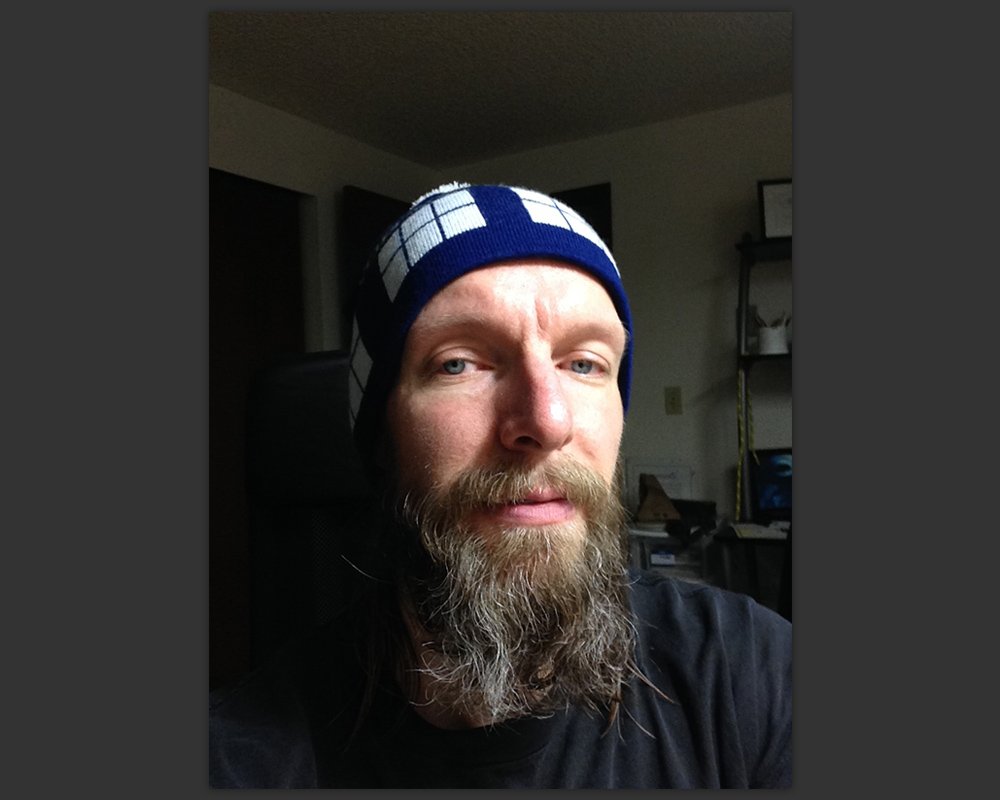 This is the photo I chose to paint from.

The Photo and Canvas Setup 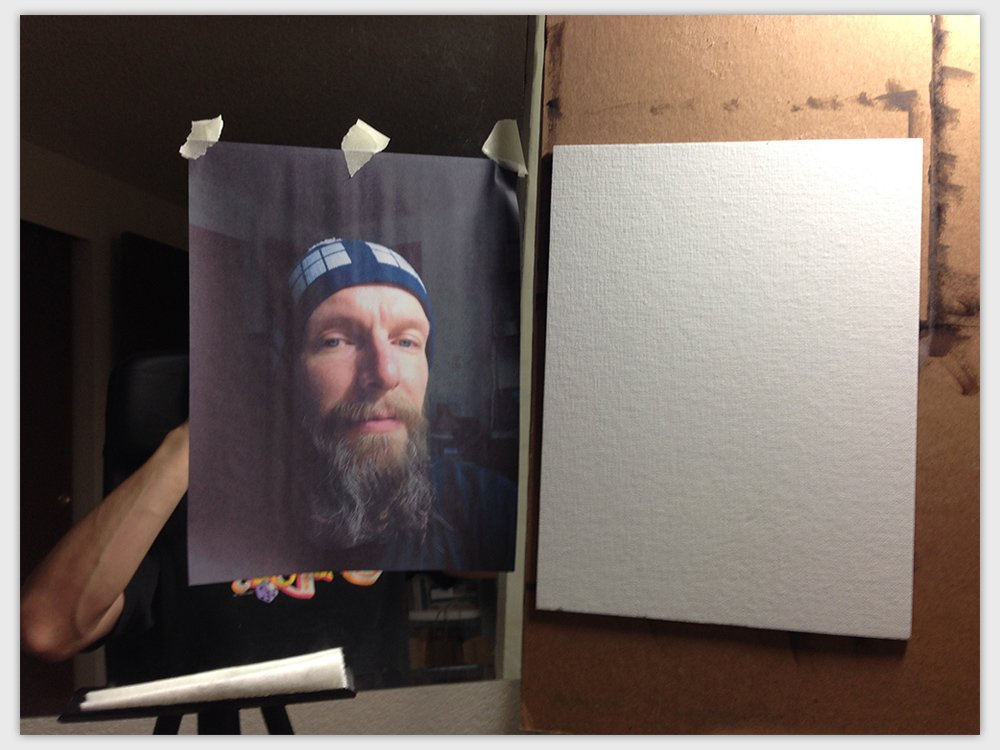 As soon as I taped the photo to my mirror I compared my face next to it and right away I noticed lots of distortion in the photo. It was almost like I was looking at my face through a slight fish-eye lens. 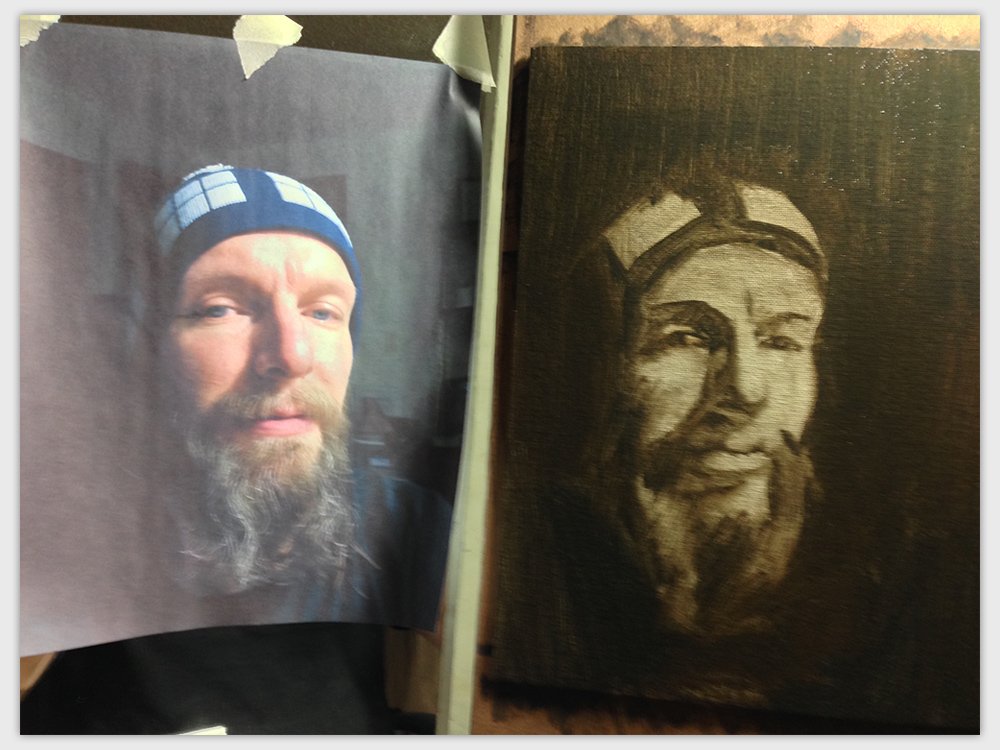 I figured the best way to unify the painting was to draw it all from the photo. I was planning on splitting my face in half and I didn’t want really bad seam between halves to bee too distracting if they were drawn way off. 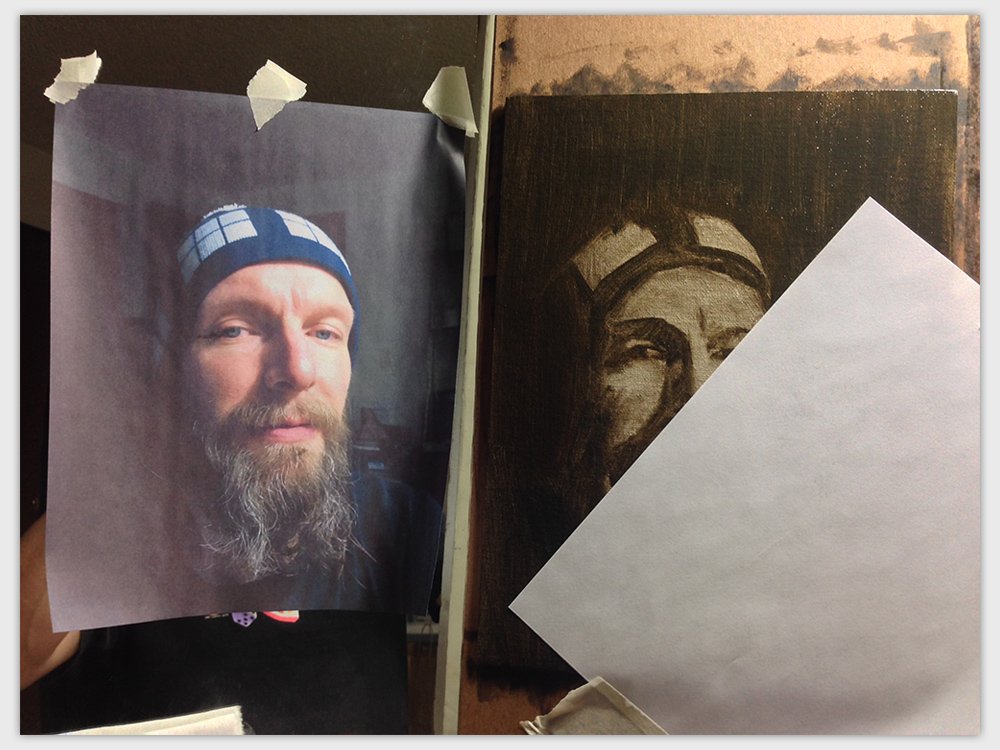 This is how I cut my face in half. I just taped some printer paper to the painting and cut my face off in a diagonal. I wanted to make it so I would only focus on one side of the face from photo with no other distractions from the other side of the face while at the same time creating a nice sharp edge where the cutoff would be. I cut my face at a diagonal because I wanted each half of my face to have both light and dark areas to deal with. If I had cut my face square down the middle one side would deal mostly with shadow while the other side would be all light. 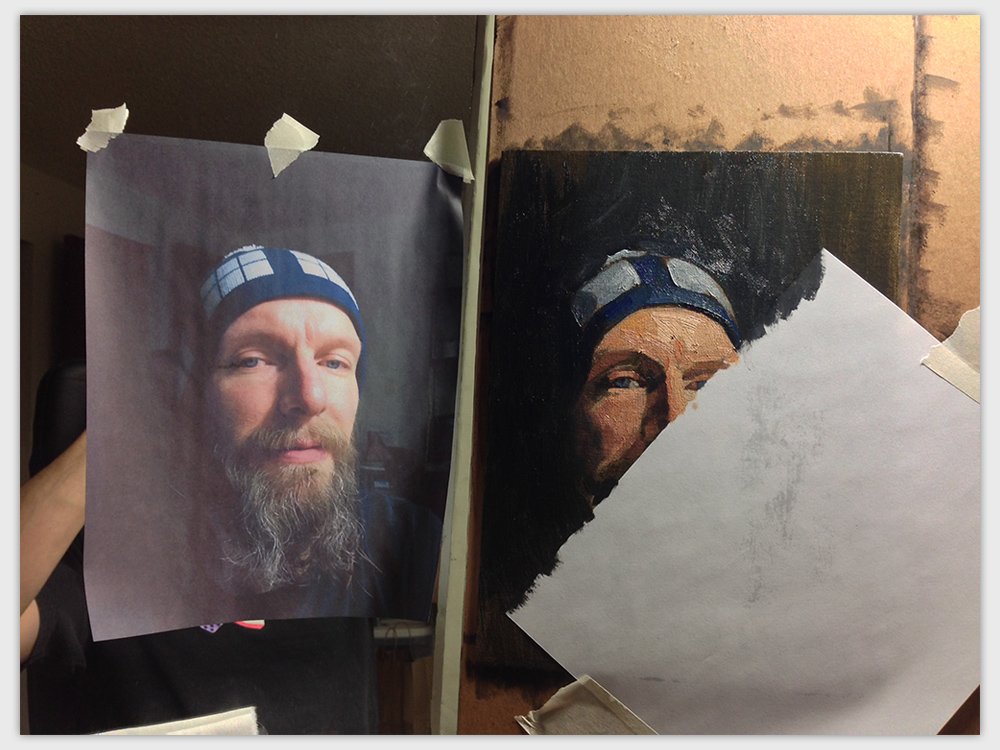 This was very interesting, I found the drawing from photo to be much easier than drawing from life. The camera really does most of the work for you by flattening the image. I also found myself measuring directly from the photo, which is much harder to do from life. Although the drawing is easier the photo has almost no detail in the shadow areas, and the lighter areas are much too bright with barely any transitions in value. Even though photos look extremely detailed I would say that they reduce detail and simplify a subject quite a bit. 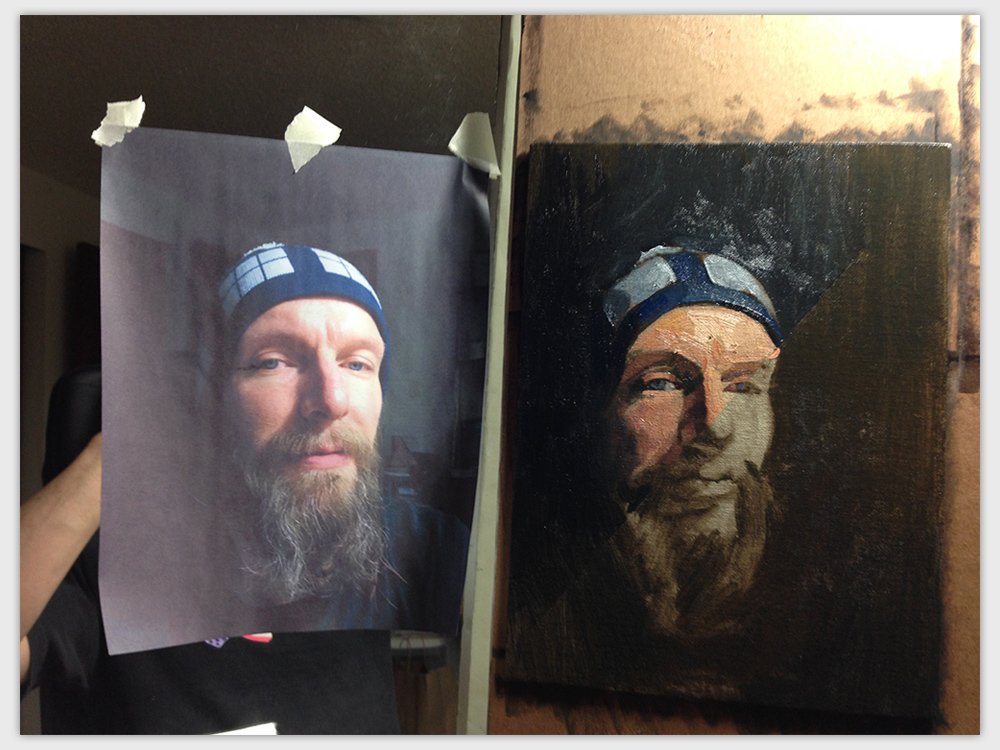 After taking down the paper I found that my drawing was well formed still with minimal seepage under the paper. 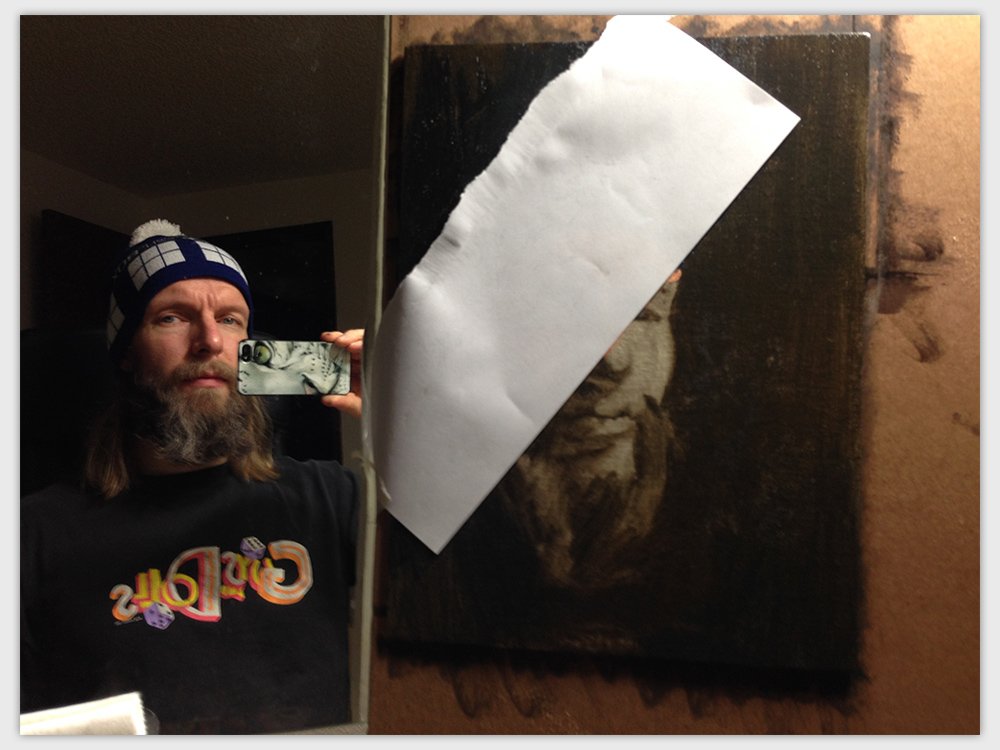 Now I matched the cutoff as close as possible with the edge of the printer paper and cover the side of the painting I just finished. Again, I didn’t want any influence from the side painting from photo. All I had was the previous drawing to guide my placement so that it would match with the left half and the paint already mixed on my palette for color. 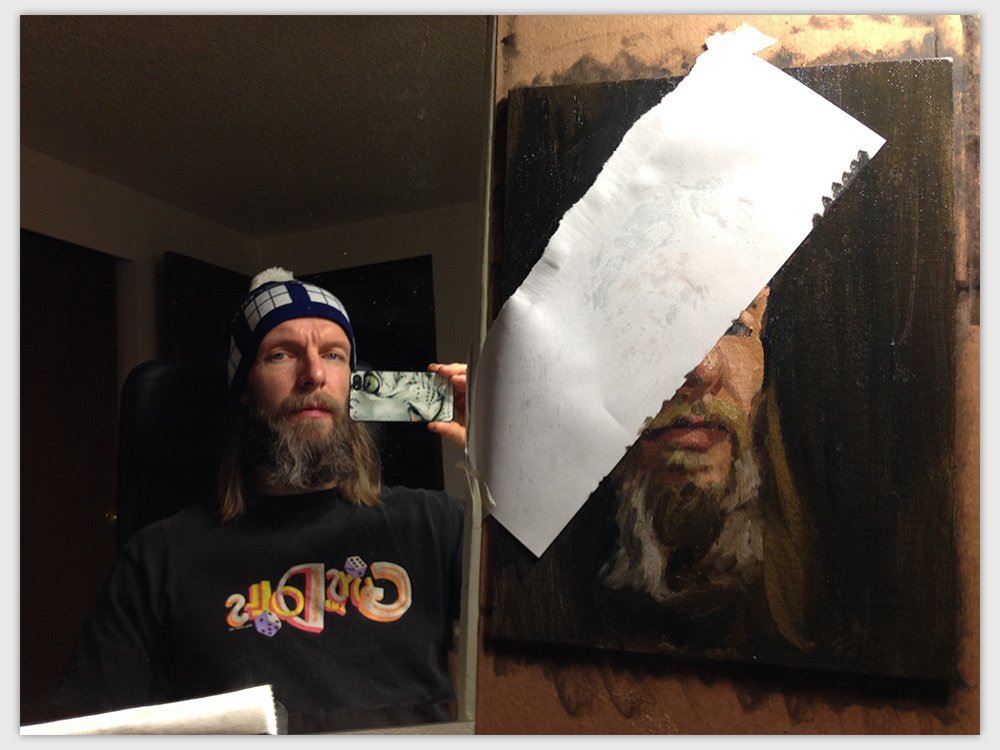 The major difference that I noticed right away once I started painting from life was the amount of detail I could see within the shadows and light areas. I also noticed that I was bumping up the chroma of the color a bit more, not extremely but I was giving it more intensity. 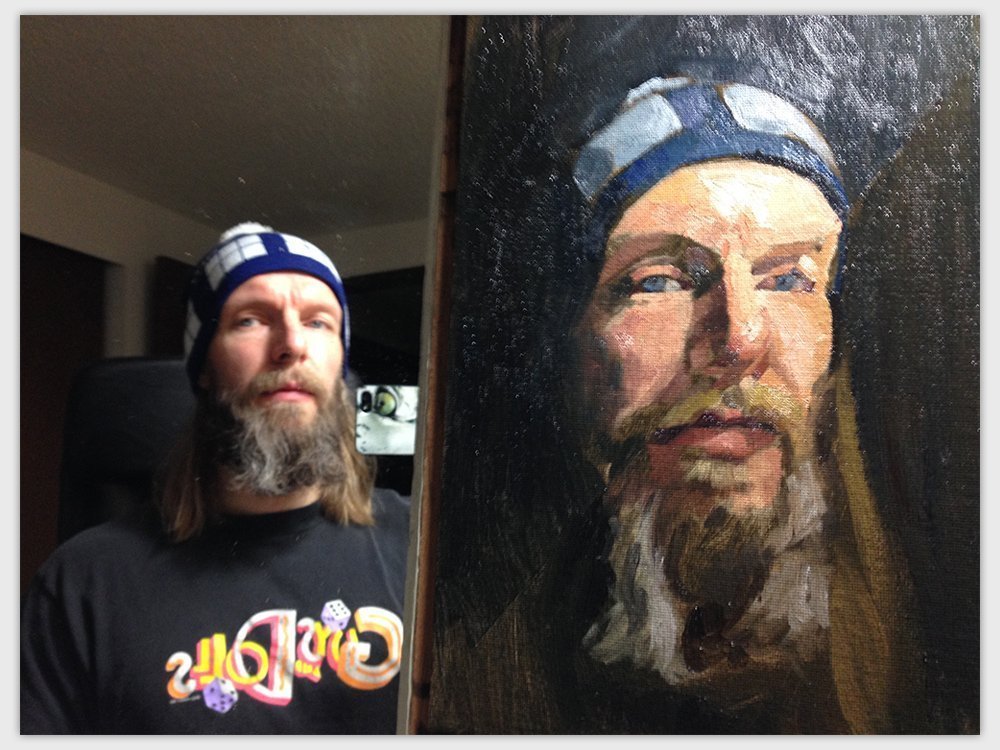 So the halves of my face didn’t match up too well around my right eye, but I felt like I learned a lot from this experiment.

Notable differences between painting from photo and life