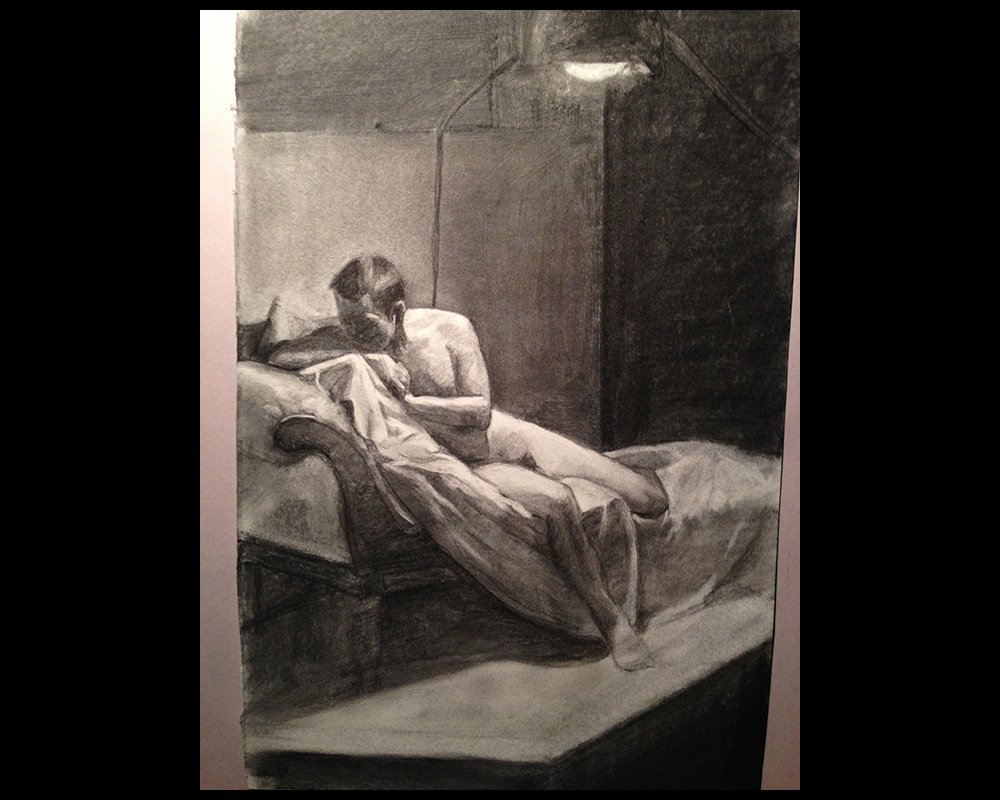 I had a good success at Gage tonight. The pose and the light was great, plus I was calm throughout the drawing and just having a good time.

20 minutes. I was thinking about what I wanted to focus on in this drawing before class and I decided to hit the major shadow shapes of the entire subject with a big chunk of charcoal as accurately as possible. I was going very slow on this, I didn’t make many marks at all in the first 20 minutes. But the marks I put down were as accurate as I could manage. I was using a big fat stick of Bob’s vine charcoal. I’m not sure what paper this is, I actually found it on the floor in one of the Gage studios several weeks ago, if I had to guess I would say it was a 190lb cold press water color paper.

40 minutes. This was a fun part of the drawing. After the first break I pulled out a big hog hair bristle brush and started focusing on edges and texture. Almost all the edges were hard at this point, so all I had to do was identify the softer edges and use the brush on them. While at the same time getting rid of the stippling left by the huge chunk of charcoal on the textured paper. I’m also thinking about value here, but in a general since, I’m not trying to be super exact with it.

I would mark this point in the drawing as pivotal. This is where the basics of the entire drawing were established and from here till the end of the session I will deal with detail and accuracy. I dare say that this is the most important point in every drawing or painting and if any artist can reach this point quickly and easily with accuracy, the rest is just embellishment. In fact most of my drawings for the past few weeks just end here if they are accurate, because at this point I have already won, I’ve passed the hard part.

60 minutes. Just to push my point a bit more about the previous photo being the pivotal moment in the drawing. You can see that, comparatively, there is not much change between the 40 and 60 minutes stage. Here I’m just using the good structure that I already setup and increasing its accuracy while building up details.

80 minutes. I’m really focusing down now and trying to get the subtle values and edges over the figure, while keeping the background in mind, its just as important as the figure.

100 minutes. At this point I’m happy with the upper half of the body and I’m moving my focus down the body and into the couch, walls and model stand.

120 minutes. Pure embellishments here, I described a bit of the legs, but most of the time was spent on the fabric and furniture. I even added the model lamp up top, I liked the glare on it an how the light would spill into the shadows behind it.

This is the photo from the Gage studio

I re-took a photo in my studio at home. My wife asked if the model was male or female and I realized that my drawing of Aaron looked very androgynous, its an interesting quality.

I always like to take a photo before and after fixative, just to check the differences. I’m not sure if its my camera, but the drawing seemed to dull a bit after I applied fixative.