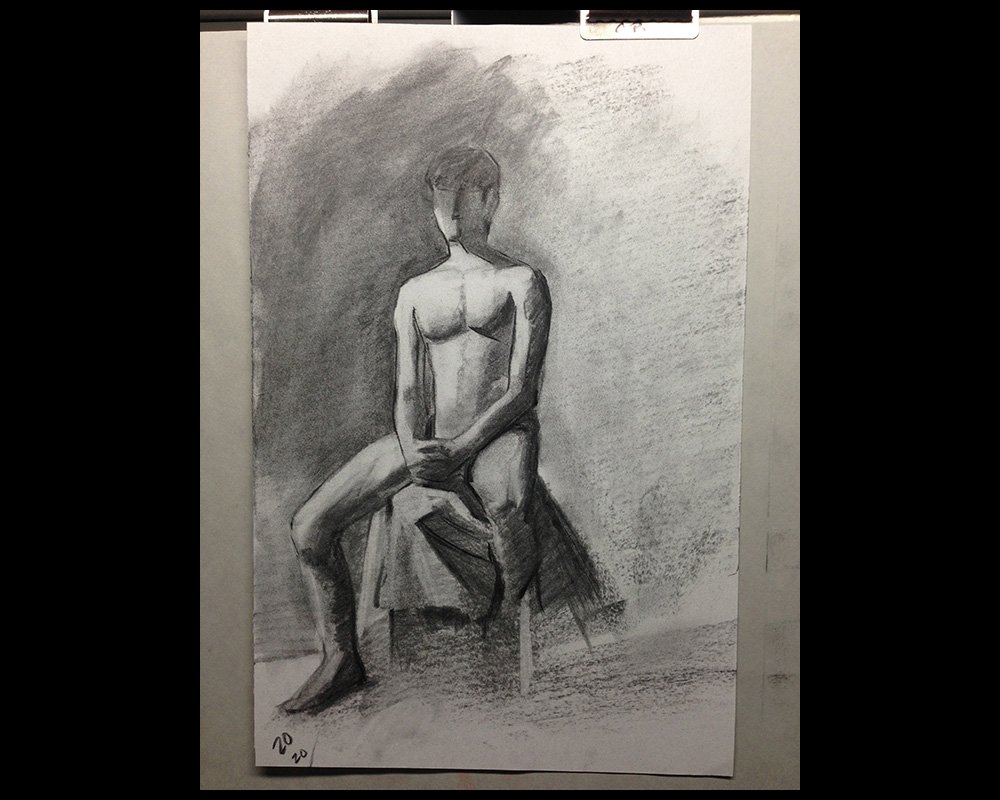 This is a continued second half of a six hour pose at Gage Academy. Instead of continuing with my previous 3 hour drawing I decided to do a bunch of starts.

My idea tonight was to do as many beginning drawings as I could. I constantly fell as though the beginning of a piece is by far the most important. If I can capture the pose accurately in the beginning in its most simplistic form than the rest of the drawing is mostly focused on increasing details and breaking shapes down into smaller shapes, along with some corrections.

So, my focus for tonights class was to accuratly capture the pose with simple shapes within the first 20 minutes.

I arrived at the class really early so I decided to start a portrait of their resident skeleton. I drew on top of this when the session started.

30 minutes total for this drawing, our first session was short, due to most of the artists arriving late…

I’m not sure about this drawing, I think my focus was lacking here, really didn’t define much of the figure accurately.

20 minute drawing. This one is much better than my first. I moved a bit more to the right of the model and most of his body was in shadow from this view. I was able to capture the simple shape of the head and back quickly.

20 minute drawing. I moved to a sitting position for this drawing and pulled out the sanguine. I got way too detailed in the head here. I remember that I was wanting to capture the idea that I was below the figure looking up and I couldn’t quite get it.

40 minute drawing. I moved back to a standing position almost directly in front of the figure. I wish I had taken a picture of the first half of this drawing, I think I got the head and torso down well in the first 20 minutes but I’m not sure.

10 minute drawing. We only had 10 minutes left after the last break and my goal here was to try and get the entire figure within that time. It turned out really sloppy though, I think if I focused a bit more on accuracy then the speed would come with getting everything right with the first marks.