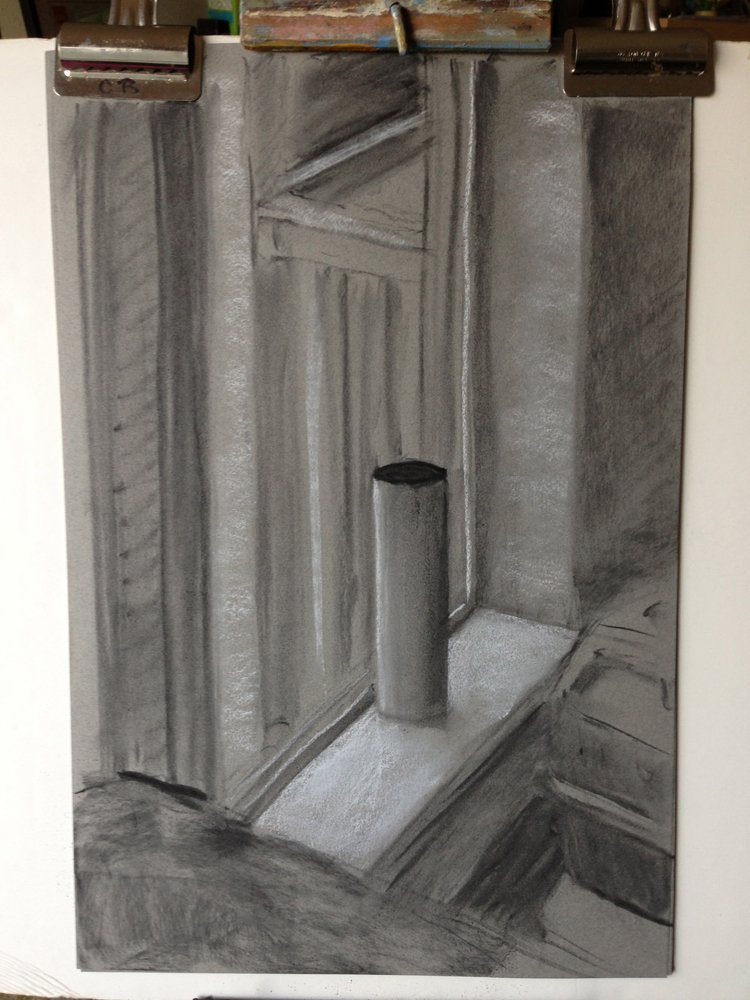 Really short session today, but I made up for it by going to the European Masters show a the Seattle Art Museum.

I didn’t do much drawing today. We had plans to see the European Masters show at the Seattle Art Museum then right after that we had to rush home because it was Thursday and that is release night.

So, here is the very short drawing, I basically set a rolled up poster on the window sill. It was a really nice day out and I had the door and windows open. I’m really fortunate to have big windows with north light streaming through, I really need to take advantage of it.

It was a good show,but I didn’t find myself moved by any of the pieces. I will add a few pieces here and give my thoughts but I have to say, as I look through google images at paintings, every single picture of these paintings that I just saw in person are absolute crap compared to the real work. I can’t stress this enough, NOTHING compares to the real thing. I’m not saying this because I’m an artist and I have a feeling for this that maybe most people would not say. That is not it at all, literally if you say the painting in person then looked at any of the photos online you would think it was a different painting. Even my wife said “Wow these pictures really suck”. Now that that is out of the way.

The star of the show, Rembrandt.

I was no different, I was taught that Rembrandt was the best and I believed it. Then I grew up, became an artist and at some point in my life learned to question everything. So, I questioned the belief, and honestly Rembrandt really didn’t move me. I don’t care what the historians have said about Rembrandt I really didn’t care for his work. Kinda like the Beetles I really don’t like the Beetles that much, I have to be careful when I say that, I may get stoned or something… Maybe I shouldn’t say “stoned”… Anyway, the point is, I didn’t care about Rembrandt. UNTIL, The National Gallery of London, I can’t remember exactly which self portrait it was that I was looking at, but the painting actually moved me. I, after questioning Rembrandt’s rule over all artist for years, saw the light and I never questioned his supreme mastery further.

The self portrait above, painted in 1661, isn’t his best, but it was displayed in the middle of the room surrounded by masters who came along close to 100 years later. It was like mannequins surrounding one man, the room was full of lifeless portraits modeled into stone while a scruffy old man moved within his frame.

Yeah, that is a bit dramatic, I’m trying to be eloquent here. Basically the Rembrandt self portraits have life to them, movement, air and power. And I’m kinda tired of the overly modeled perfection of the other portraits. Of course, they are all amazing, but we all know who the king of artists is in this room.

The setup of these two painting in the gallery by Joshua Reynolds was great. They both were set next to each other. The right was painting right after he left school as a young artist. The left was a self portrait late in life just a few years before his death. I stood in front of these paintings for a while, comparing, trying to find growth or change in his work. Maybe a bit more bravado with the brushwork, maybe a bit more confidence in his work, something anything. But I couldn’t come up with anything. These could have been painted within the same year, maybe I just can’t see it, but as far as I’m concerned I don’t think he changed as an artist at all. Its as if he became his greatest early on, and then never surpassed that, or maybe never tried.

This was another great setup in the show. On the left is a portrait by George Romney and on the right is a portrait by Joshua Reynolds. And they are both of the same woman. Its great to see that the likeness is there in both images. But what I was most interested in was how each artist portrayed “Mrs. Musters”. The plaque next to the painting said she was a very solemn woman and I think Romney nailed it. But Reynolds is was trying to bring the depiction of classical mythology back into painting  so his painting is more like he put Mrs Musters on stage and had her play a part.

Kitty Fisher as “Cleopatra” Dissolving the Pearl was one of the better of all the paintings there and another depiction of Reynolds bringing classical mythology back into art.

There were a few other painters there that it was nice to see. William tuner, one of his earlier pieces. It was a very sober painting compared to his later work, I prefer his later work much better. Now here is an artist that grew and changed and became absolutely amazing further along in his career, Reynolds stagnation through his entire life really confuses me…

We saw a Henry Reaburn portrait of a child. I have always liked Reaburn since I saw him in the National Gallery in DC. And it was necessary that he be in this show with Reynolds, Romney and Rembrandt. Every good curator knows that you have to have the four R’s to really confuse your patrons.

And for the last, I saved Thomas Gainsbourough. Both my wife and I agree, he was terrible. Wow, I was amazed, and I think you can only come to these conclusions when you view artists in a room with their contemporaries. Because they all are amazing artist and in a room by themselves they shine bright, but its that comparative that really enlightens us to why historians say, “this guy was the best in the mid 1800’s”. This is also the main reason why I live the National Gallery in DC, all the rooms are organized by date so you get to see everyone next to their contemporaries, and you really pick out the best in an instant.

At the end of the day the biggest thing that I left with from that show is that I really need to step up my game. To even get to Gainsborough’s level I need work my butt off.