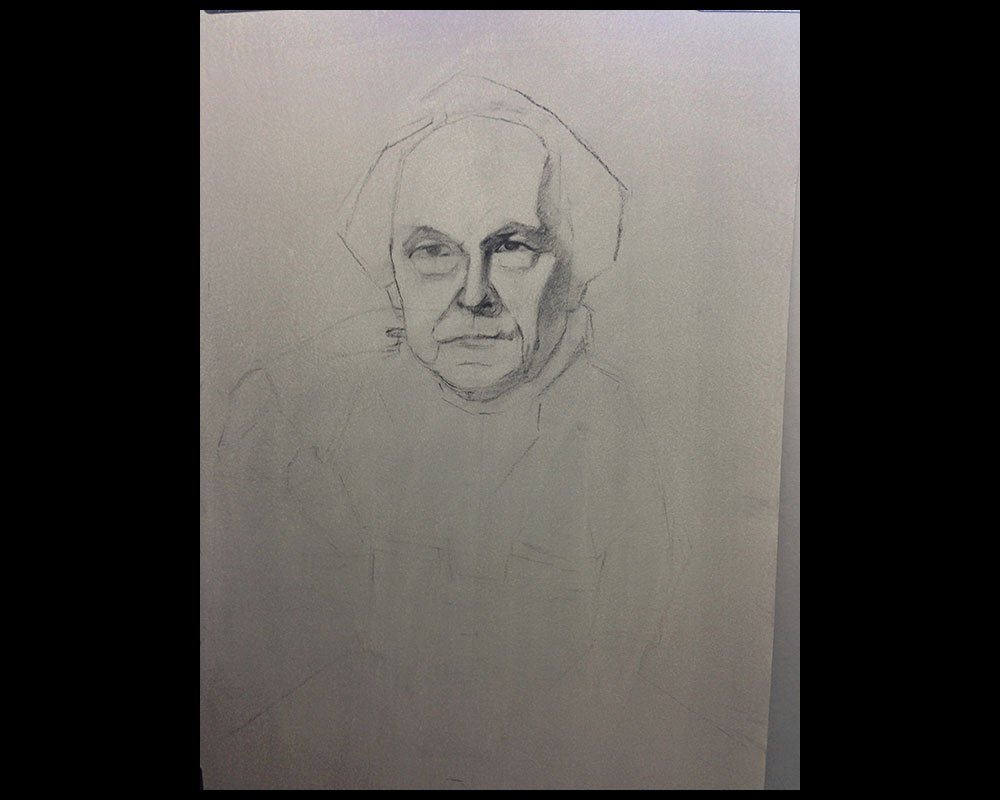 It has been a while since I have had such a big failure in a life drawing class. I’m sure that I will learn a lot from the mistakes I made here.

Studio Anaphoria is an amazing studio where they have a long pose three hours session on Tuesdays for two weeks in a row. Its a great opportunity to make a long term drawing, and that is exactly what I was planning. I had purchased some really nice paper, Arches 300lb Hot Press watercolor paper. Then I was super careful in laying down a very even watercolor wash over the sheet after cutting it in half. I was prepared for a great drawing with superb paper, but, it failed miserably.

First of all I was late to the session after spending almost two hours in traffic in a hot truck with no air conditioning. This was not a great way to start a session. Luckily I was able to get a good spot in front of the model, while trying not to annoy the other artists too much. Needless to say my mind state before the drawing was not well.

I had come too far and prepared too much to turn back now though. Besides, the model was very cool. He was an old guy sitting in a chair clad in rusty plate armor and chain mail. The subject is a bit cliche but I had never drawn anything like this before so I was excited to try.

Unfortunately, nothing was going well, I was measuring like crazy trying hard to get the proportions perfect while at the same time being careful not to mess up my awesome paper. Little did I know that I was so worried about proportions and messing up the paper that my drawing execution was timid and stilted. I was so timid with the drawing that when the model came back from break and the pose was off slightly, which is something that always happens, I couldn’t recover from it. Even though the difference was slight, I didn’t have enough on the paper to compare with the model, so every break it was like starting over again. The whole ordeal was extremely frustrating. So much so that I erased the first drawing and decided to focus on the face and nothing else. I never really recovered, even when I just focused on the head. Too much had gone wrong, and this session was soon a bust.

I was reminded of this great post from the L.A.R.A website called “Chasing The Pose”. I had read this post a few days earlier and it didn’t really make much since to me until after this session.

Being to reliant on pure observation can produce a drawing made up of several different poses melded together resulting in “stiff” or motionless work.L.A.R.A Blog

I never realized how true that statement is. I had experienced it before, but never noticed it for exactly what it was. The drawings that I would do of the model where proportions were super accurate always looked stiff and lifeless, but when I would let go and flow with the form only comparing proportions with my eyes I would almost always come away with better drawings. I’m not saying that measurement isn’t necessary though, I believe that measurement is a great tool to train your eye to see and your had to follow. Being very strick with myself in measuring has allowed me to become more accurate when drawing without measuring. What I’m saying, and what I’ve heard Jamie Bollenback mention on several occasions, is that its a balance. A balance of mathematical measurement and organic flow.

Beatrice, a wonderful woman in my Wednesday and Sunday sessions really understood my ordeal. And she had the perfect solution for timidness with good materials for the first time. And that is to work with good materials ALL the time, that way you will get comfortable with destroying them and not so tense that you ruin the drawings every time.

On the bright side, I always seem to learn the most from my mistakes.