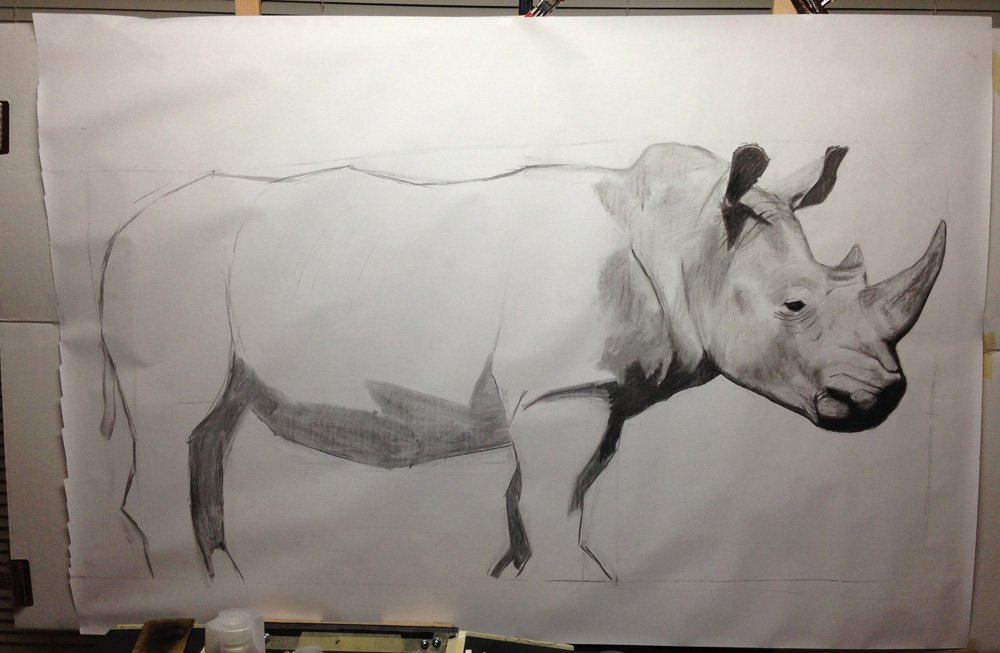 A while ago Pattie asked me to draw a large rhino for the local Bowling for rhinos event. As the event is this Saturday I started the drawing tonight.

This will be used for a game called “Pin the radio transmitter on the rhino”, so the drawing only needed to be a simple illustration. I decided to do much more. I’m in the mode now where I want to train my eye every day to become more accurate in judging spacial relationships. And this proved to be a very fun and informing drawing, that really showed how great site-size method drawing really is.

Of course I would love to be drawing from a real life model but, unfortunately the cats would not like a rhino in the apartment.

This is the first stage of the drawing, I anticipate one more session to finish it.

Very large drawing here, its about 4 and a half feet wide and 3 feet tall.

In order for me to site-size this correctly I had to get the picture the same size as the drawing, which meant I had to setup the drawing about 10 feet away from the paper, and I stood about 3 feet from the picture. I marked a place on the carpet with tape so I knew what position I had to return to each time I needed to compare. I also marked two notches on the photo which corresponded with two drawn lines on the far left of the drawing, you can’t really see them here they are too light and small.

So the basic idea is that I would line up my body and head in the correct position using the marks on the floor, the picture and the drawing. Then I would make a judgement such as the placement of a horizontal line intersecting the top of the horn, or the top of the whole rhino. Then I would move forward quickly without taking my eyes off point in the drawing where I think the point should be, make the mark on the paper, then return to my observation point to compare correctness. It turned out to be a lot of walking back and forth, but the drawing began to bloom out of the paper slowly, and I was very surprised at the accuracy.

Considering that I was about 13 feet away from the drawing and any measurements that I was doing would vary wildly with the slightest movement of my hands or arms while measuring, I think the accuracy turned out really well. The only bad part is that I truncated the rhino a bit, and worse than that is the paper ends and the rhino extends beyond it. I will have to add some paper to the drawing and fix its hind quarters.