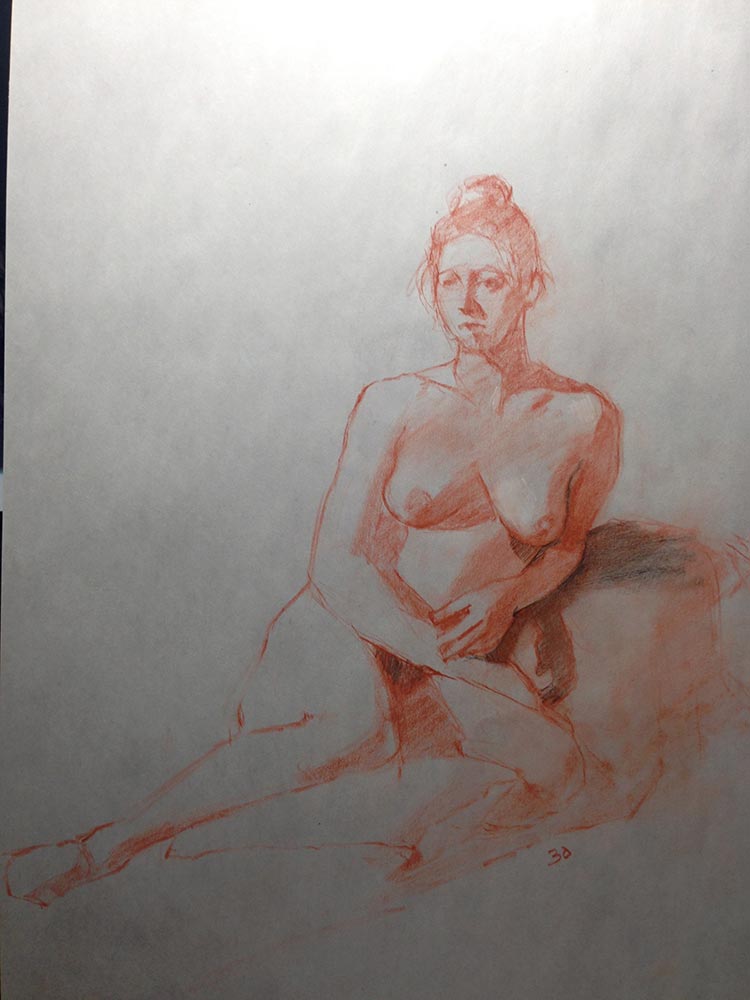 I may have posted this before, but I’m forgetful and I need to repeat things often to remember them, but drawing accuracy, at least for me, is the most important. Tonights life drawing class proves it, and I also learned that certain sanguine pencils are sub par, but that will have to wait for a later post.

The whole drive home after life drawing tonight I was debating, out loud, to myself why I feel that accuracy while drawing is paramount. I’m discussing this, with myself in a crazy sort of way, because during a drawing session when multiple poses are involved I tend to switch between several working methods. For gesture drawing I employ a more fluid longer stroke approach and for the other poses I switch between quick haphazard mark making and slow careful building of the forms. I think it may be a subconscious effort to hopefully stumble upon a secret magical method that will allow me to draw like the masters, we all know that no such secret method exists.

The problem with this approach is not the different methods throughout a session but the goal behind them all. The goal is a finished beautiful drawing of the model that I will be proud of and want to show on my website. Instead of focusing on the finished drawing and making decisions based on aesthetic appeal I should be focused on working accurately.

So I take a step back, think, and ask a couple questions of myself.

What makes up a “good” drawing of the figure?

Most people can tell when looking at a drawing if it looks “right” or not. Yet it’s very hard to explain why. We don’t need to see the model that the artist drew from, over the years we have developed a visual since of the human form and know instinctively it’s subtle shapes. This is why figure drawing is so important, I could inaccurately draw trees for years and no one would ever know it, but as soon as I draw a finger a little tiny bit incorrectly, the mistake leaps off the page.

Look at this page of drawings by John Singer Sargent. Now, look at the drawing of the fist on the bottom right. What’s wrong with it? Can you tell me why it doesn’t look as correct as the rest of the drawings, or for that matter can you tell me why any of these drawings look more correct than others? It’s really hard to describe why a drawing looks right or wrong but I look at this page of drawings and know instantly which ones are more correct than others. It’s not because one is more finished than the other, the top right hand proves that, It’s just a contour and it doesn’t even have great line quality, but it looks correct.

Here is another example by Anthony Ryder. The bottom half of this figure is unfinished but I look at the basic contour that he has laid in and it looks dead on correct and accurate.

Or I could just take a photograph of a person and trace the outline of their body with the most simple line possible and it would look correct. No shading, no variation in line thickness, just a simple old contour and yet, it looks…. “right”…

So, I ask again. What makes up a “good” drawing of the figure? The answer, line placement and accuracy. It’s that simple, remove yourself from the subjective ideals of what you like and don’t like, I’m talking about the accurate representation of a figure in a two dimensional space. The overriding, all important and most paramount aspect of a correct drawing is line placement.

It seems that an artist doesn’t even have to have his or her line placement perfectly exact to make a correct looking figure drawing. Egon Schiele demonstrates that over and over again with his amazing works. Don’t be fooled by the seemingly haphazard lines of Schiele’s drawings he had a keen since of anatomy and proportion. If he had drawn this figure with the head too small we would recognize it right away. In fact I don’t think Schiele or Sargent could make such wonderful drawings without their knowledge of proportion and anatomy being less than second nature. Their vast experience and skill allows them to place lines accurately in such a fluid and natural way as to seem effortless.

What exactly do I need to practice now to one day be able to produce a “good” figure drawing in a limited time?

The short answer here would be “Draw more, draw often”, and although this is true there is still a possibility of learning a lot of bad habits so my drawings must be tempered with direction and focus.

In this drawing I was working faster than I could handle in a very haphazard way with little focus on accuracy. The goal was to get a finished drawing. What I ended up with isn’t completely awful but it has many issues. The head is too small, the length of the body is too short and the top half is a bit wide. In my rush to get to the value I skipped over the most important aspect of correct proportion, no matter how much awesome shading I do to this drawing it’s not going to bring that back.

So, basically this sanguine drawing is an example of how not to practice. Working this fast with little consideration of accuracy just continues to reinforce a working method that relies too much on luck to get line placement right. But for the next drawing I changed up my method and I think it’s far superior.

This drawing has much more accuracy than the previous one. Incidentally this was the last drawing of the night where I began to really recognize the value is slowing down and carefully considering the placement of each line. I even measured many times on this figure to check my proportion. Of course I didn’t end up with a finished drawing in 30 minutes but the drawing before this wasn’t finished either. The difference in this drawing is that the foundation is solid and accurate.

So here is what I should focus on and practice