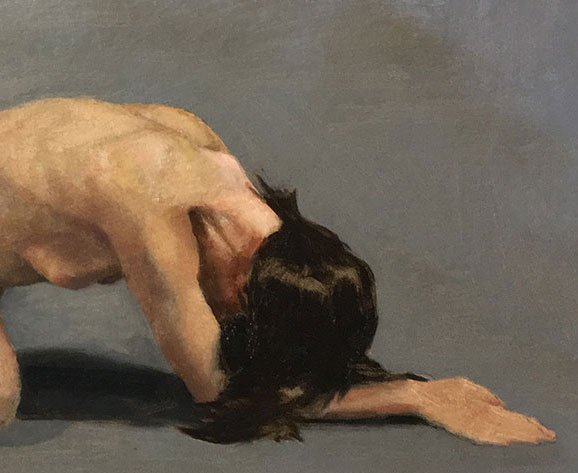 Before I start a session I almost always know what I’m going to be working on.  Today was different and it resulted in almost no progress.

I just finished a 16 hour long figure painting and was contemplating starting a self portrait. But, after getting out my mirror and trying to setup lighting I concluded that I just didn’t have enough light in my room to pull it off well.

Then I thought I would start a new figure painting so I began to gesso a new sheet of watercolor paper. But after completing that and looking through my bank of images I decided against it.

Unfortunately, I was doing all of this later in the day because I had to stay later at work. So I was already behind my normal schedule.

Eventually, I pulled down a figure start painting I had worked on weeks ago and decided to work further into it. By this time I was tired, frustrated and had already spent 1.5 hours with nothing to show for it. Not only was my mind not in its right place, I wasn’t doing anything I was interested in at the moment.

So the lesson for today is that I should always have a plan in place before starting my daily session.

Here is the original figure start.

Here is how much I actually worked on it. Just a bit pf work on the neck and hair.

2 thoughts on “No Plan, No Progress”