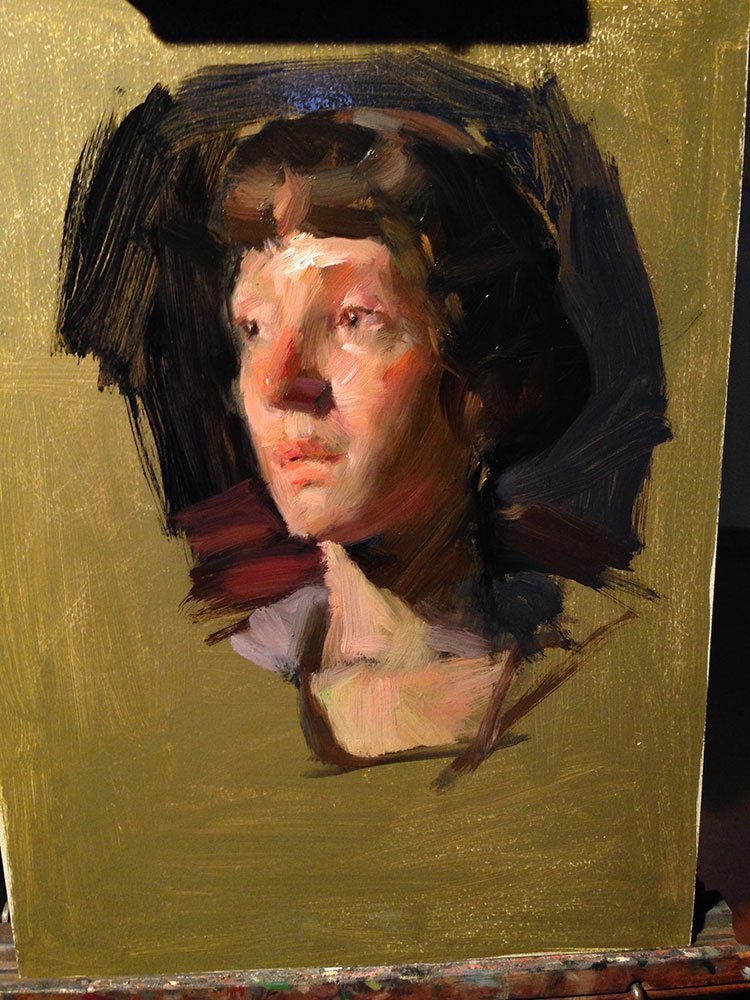 Sunday I had the pleasure to help out with and attend the Max Ginsburg demo at the Whidbey Island Fine Art Studio. I didn’t take a ton of notes while watching the demo but I learned a lot by just watching how Mr Ginsburg worked.

At this point Max was setting out his paints and getting comfortable. I was manning the video camera in the background which was projecting a close up image of max working on the wall to the left.

Max began by describing basically what he was going to do during the demo.

After the first 20 minutes Max has the basic drawing in. He measured very little and worked up the portrait with a focus on form rather than line. At the same time he was adjusting some of the values and keeping their shapes blocky yet separated into their respective groups, light area, shadow, etc..

During each 5 minute break everyone would crowd up around his easel to try and get a closer look at his painting and take photos. It was actually a great opportunity to talk to the other artists coming to see Max work.

The change from the first 20 minutes was rather dramatic, and I’m amazed that the painting began to unfold so quickly because as I watched him paint he was working very slowly and methodically. He would talk about a section of the models face commenting on if it was light or dark or warm or cool, then place a stoke down based on his observations. Then after it was down he would evaluate and adjust that same stroke. The whole process was so slow yet very controlled and deliberate. I don’t believe there was any wasted effort while he was working.

Here are a few comments from Max that I wrote down.

The one comment that resonated with me the most about Max’s working method was when he said “Don’t do it unless you observe something in relation to it”. Again, this underscored the slow and deliberate working method he uses, in fact half of my notes are about how methodical he worked.

The interesting thing about this painting is that it doesn’t really capture Mikki’s likeness well and yet it has the same attitude in the face as Mikki had. I can see the same subtle expression. But most of all I can tell that even with the little time spent on this painting the skill employed was tremendous.

Max had a bunch of his painting sitting out for sale and all of them really showed his amazing skill.

I always have in the back of my head this idea that if I just get the right or same materials as another amazing artist then I can paint as good as them. Well, I’m sure better material can help but I know that really its the hard work and time that you put into it that counts.