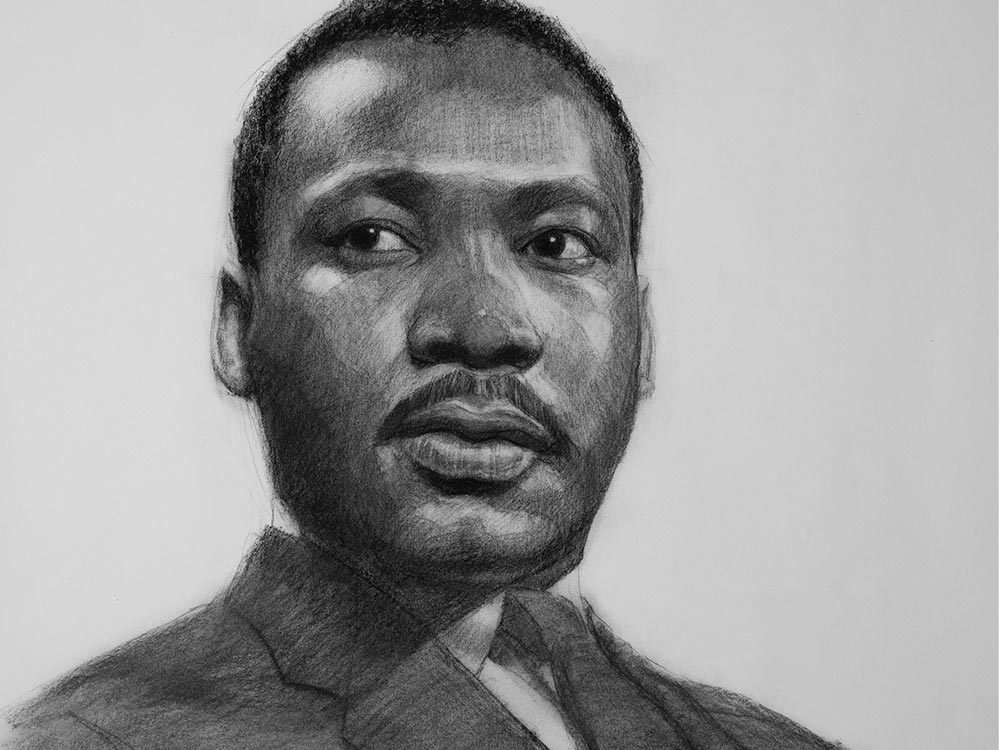 I’m not entirely sure that I wan to call this drawing of Martin Luther King Jr drawing finished. But for now, I think it is finished.

The purpose of today’s session was to instill more structure in Martin Luther King’s head as I seem to have lost it last time.

The first thing I did to bring back a lot of that structure was to get out my eraser and lighten up the lighter areas of his face. Right away this created much more contrast in his head and allowed it to pop off the page.

Then I worked back into the drawing with lighter charcoal and tried to define the changes in the planes of the face more.

Today I’m featuring Martin Luther King’s Nobel Peace Prize acceptance speech. I had no idea that he won the Nobel Peace Prize, but honestly with how he has changed the world it seems obvious now.

From Wikipedia: King’s admiration of Gandhi’s nonviolence did not diminish in later years. He went so far as to hold up his example when receiving the Nobel Peace Prize in 1964, hailing the “successful precedent” of using nonviolence “in a magnificent way by Mohandas K. Gandhi to challenge the might of the British Empire … He struggled only with the weapons of truth, soul force, non-injury and courage.”

“I accept the Nobel Prize for Peace at a moment when 22 million Negroes of the United States of America are engaged in a creative battle to end the long night of racial injustice. I accept this award on behalf of a civil rights movement which is moving with determination and a majestic scorn for risk and danger to establish a reign of freedom and a rule of justice.”

I’m excited to call the first Martin Luther King Jr Drawing finished but even more excited to start on the next. He is just too important a person and such a huge hero for me that I need to draw him multiple times.

I’m sketching the torso in different poses that show off foreshortening direly from Steve Huston’s book. After warming my arm up for the day.

For two days in a row I’ve done 25 1 minute gestures. I find it interesting how one day will be full of good drawings and the other day will kinda suck.

The daily composition is a practice I started from The Natural Way to Draw by Kimon Nicolaides. But the daily sketch is something that I started from Figure Drawing for Artists at Steve Huston’s suggestion. I’m not spending a ton of time each day on both the practices but I am putting in about 3 hours of art a day consistently.

The sketch is of a wood letter opener that my Dad made before I was born, or the year I was born and recently gave to me. It’s very important to me and stays on my desk all the time.

The daily composition is of a couple basking in the sun at the park from yesterday during our workout.

Loving my art practice so much right now! I can’t get enough of it.

My ability to focus on the motive for gestures first and try and communicate that. Plus all kinds of memorization of the body in any position.

I’m learning a ton by watching video on YouTube of other artists like Steve Huston do question and answer sessions.