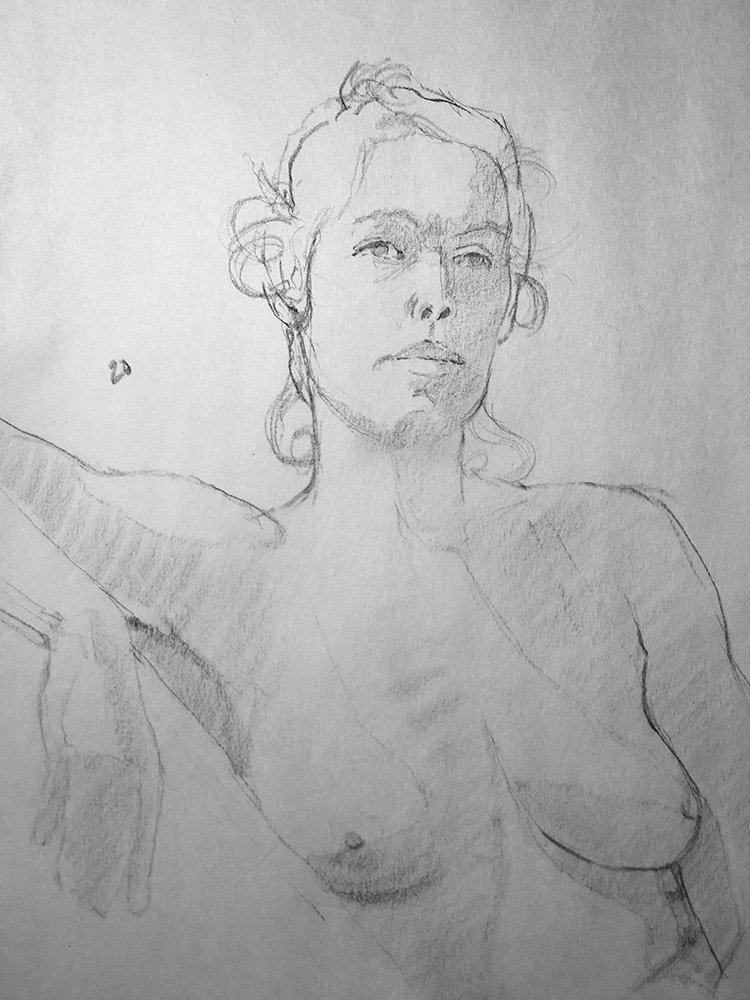 It’s been too long since I’ve had a proper figure drawing session. I was going to say it’s been forever since I’ve drawn from the live model but that would be incorrect. I drew form a model last Sunday, but it wasn’t a very focused session. After two months and a 3 hour mad dash to Gage academy I was able to do some drawing from a live model.

This was the first time that we left the island on a Sunday morning to go to the mainland. We thought we had prepared with more than enough time to get there on time. Then we discovered the longest line waiting for the ferry that we have seen yet. I was super frustrated at first then realized that I would still get to the studio with at least two hours of drawing left, which was good enough for me.

As luck would have it we actually made it to Gage academy right at 1:30. I figured the first pose would have started but I think the model was running  a few minutes late. So it worked out perfectly.

The session was one pose the whole time so I started with a sever foreshortened angle with plans of moving around the room at some point during the session. I had a lot of trouble with the foreshortening of the figure and misjudged a lot of placement. The horizontal line on the drawing above marks where the knee of the mode should be and by this time I had gone way too far into the drawing to bring it back. So after an hour on this on I decided to get a completely different angle.

Now this was more like it. I guess since I wasn’t able to do a warmup before drawing that I was warmed up by now to do some better drawing. Plus I was very comfortable drawing the way I have been for the past weeks with New Masters Academy photos. I was very happy with this drawing because it really proves that after two months of drawing mostly from photos I didn’t lose any ability in drawing from the live model. Actually in some cases I may have gotten better. Now, I’m not sure if this would be the same if I committed 5 years to drawing from photo, but at least I know now that a few months drawing from photos isn’t going to hinder my artistic growth.

For the last couple segments of drawing time I took advantage of a spot that opened up in the studio. For the first 20 minutes I focused just on the portrait and a small part of the torso of the model. Then I spent the remaining 25 minute refining the drawing and adding in the rest of the body.

This would have been a wonderful drawing if I didn’t give the model a tiny left hand, but I’m satisfied with most of what I was able to accomplish here.

Overall it was a great day and I’m going to spend every Sunday in august at the Gage open studio.

3 thoughts on “Life Drawing From a Live Model”