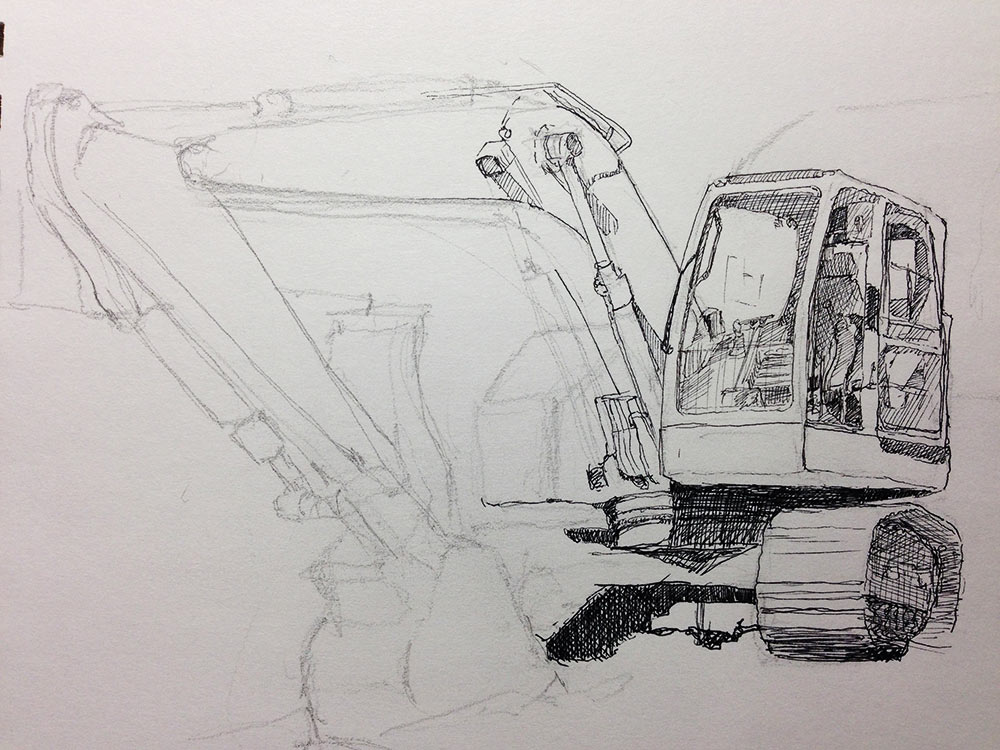 So far one of the most amazing places I’ve found on the island is our nearest recycling center. I know it sounds odd, but this place is fantastic! I see myself returning to this place at least once a week and doing painting or drawing, it’s just too interesting to pass up. So for my first trip there today I made it simple and did an excavator drawing.

I didn’t want to overwhelm myself with oil paints and a long setup and takedown time. It’s been a long while since I’ve done an oil painting on location so I decided to keep it simple and go with just sketching materials. I brought my easel and a bag with two sketchbooks, pencils and my hi-tec-c pens.

Turns out that this was a good choice. I can’t describe well the organized chaos that is the Island Recycling center. It’s similar to a forest of trees, or the stars in the sky at night. When you look at randomness in nature you can never say, “That’s so disorganized”, because it’s not… and yet, it is, but in a perfect way. Perfect disorganization.

The is what island recycling is like, but with all our stuff, discarded and unwanted. Then categorized and piled, sometimes neatly. I swear I spent 5 minutes just staring at a huge rusted stack of old yard equipment, it was fantastic!

Yet, with so much awesomeness around me, I had to pick something to draw. This was very hard, so with only one hour to work I decided to pick out something recognizable and not so chaotic for my first time there. Eventually I’ll dive into the organized chaos, but today lets keep it “simple”.

So yeah, drawing and excavator wasn’t the most simplest thing I could have picked but it was still one assembled and recognizable object. When your standing amidst the carnage of forgotten metal the excavator seems much easier.

I started drawing in pencil, and got a good lay-in of the whole excavator before starting with pen. I wanted to take a photo of the start of the work so that I could see how the shadow shapes changed in the hour that I was here.

Here is the setup at the end of an hour. I didn’t finish the drawing but I’m ok with that. I had a ton of fun. I was working so detailed that the drawing went very slowly.

In the middle of the drawing this rooster starting crowing right behind me, and it was quite startling. I think he was playing a joke on the artist trying to mess him up. Funny rooster!