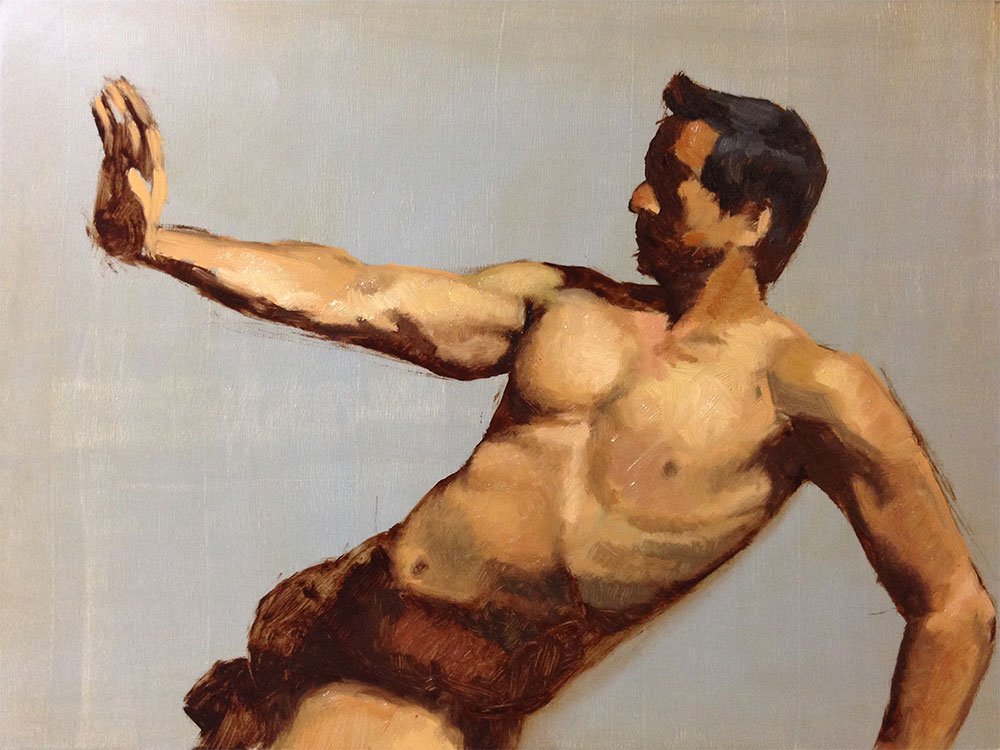 Just trying to keep this figure render simple with a focus on basic shapes, I’m learning a lot here and I need to do a ton more of these.

Here is an outline of the process that I’m trying to achieve. I pulled all this text almost exactly from this post on the Studio Incamminati blog. Rewriting it helps me remember what I need to do when I’m in the heat of the painting process.

Grisaille is a process using brown paint (I’m using burnt umber,  but you can use burn sienna ultramarine blue and white) to work out the drawing before color paint goes on top. This first stage of the painting process is used to work out the proportions with line. Line drawing can be described as a series of relationships based on tilts and distances. Charles Bargue and Jean-Leon Gerome: Drawing Course is a famous book on this type of training that many still use today. Working towards getting accurate proportions is critical in portrait painting because it is one of the keys in getting the likeness of the sitter.

The grisaille block-in stage is where the shadow shapes are filled in. This step allows the artist to see the drawing in mass rather than outline. Drawing in mass allows the artist to get a sense of the proportions of light versus shadow and the drawing begins to take on more of three dimensional quality. One value for the shadow and one value for the light is called the “graphic shape”. It is called this because it looks flat and two dimensional. The graphic shape is another opportunity to re-evaluate the proportions.

After this a few darker values can be employed in the shadow mass by adding a thicker application of the grisaille color. Two or three values in the shadow mass is all you need. It is always better to keep things simple rather than complicated. All values are blocked-in as flat shapes. I’m are not trying to “render” yet, that comes later. Instead I’m are working on the proportions of flat shapes (generally working from larger to smaller) and estimating the lighter to darker relationships of the two or three values I’m are using.

In the duo tone stage I add a generic flesh color to the areas of skin that are being hit by direct light. This separates it further from the shadow mass and gives a better sense of light hitting the surfaces. In the first layer or “first pass” the flesh tone is applied to all areas of light equally in a thin layer. This has the effect of making the light mass look flat and dim. The main purpose for this is that its easier to then build the smaller shapes of lighter values on top. The shapes get smaller and the values get lighter as you work towards the light. This is a very traditional method of working and has been employed for centuries. Again, simplicity is best. So the number of values in the light mass need only be about four plus a highlight. It is easier to organize and work with three to five values than it is to work with twenty.

At this stage I can begin developing beyond the three values in the shadow mass and four values plus a highlight in the light mass. It should be noted that the simplified organization of shapes and values up to this point needs to be maintained until the very final stroke and the painting is considered complete. This is what will help the painter keep the “train on the tracks” as the shape/value/color and edge relationships become more complicated. It is easy to get confused if the simplified organization of the painting gets lost in all the smaller progressions. As the duo tone progresses smaller and smaller planes emerge. It is kind of like a marble statue that is being chipped away into smaller and smaller bits. In between each of these smaller shapes or planes or bits are edges. If the edge between is soft it helps to create a rounded surface between each plane. This becomes the “rendering” stage. Duo Tone is supposed to be a stage of development before color is added (the underpainting), but it can be considered a complete work.

Here is where the entire palette of colors is introduced to the painting. A stage where lots of color study is necessary to get all the subtle yet complex hues correct.