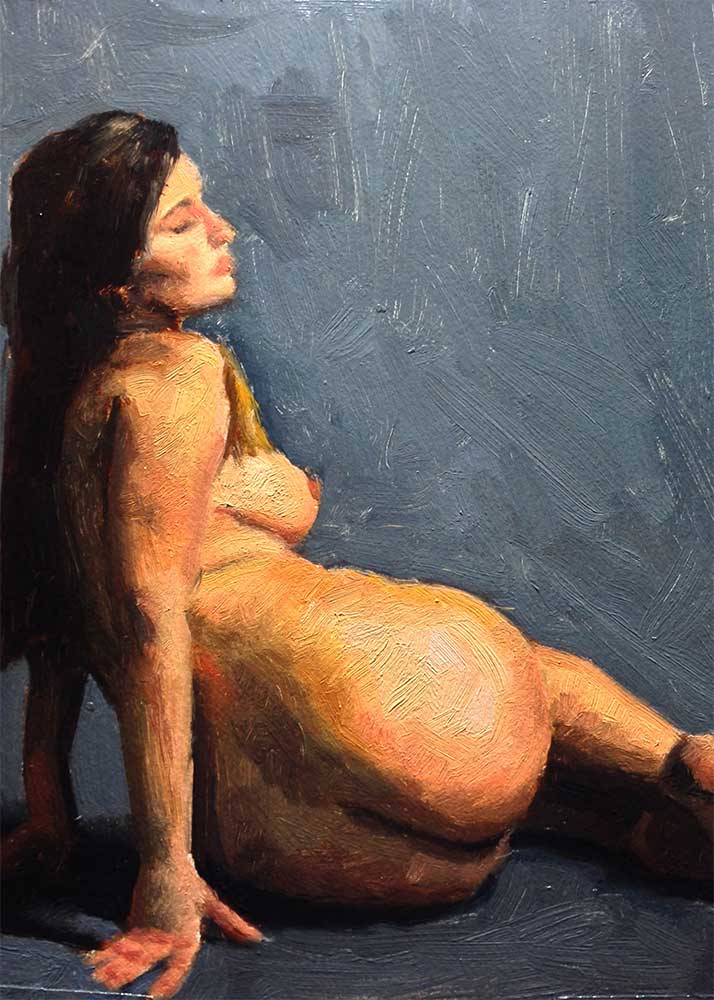 I want to do a bunch of these figure drawings but I don’t want to spend a bunch of money on small canvases for these studies so I’m attempting to paint on primed paper today. The female figure study on paper seemed to go no differently than a study on canvas and the absorbency of the gesso was very similar to the oil primed canvas I used for the previous painting.

I figured I would document the steps I’m using to build up this figure in oil. It’s a nice and simple process one that I can follow and keep myself focused on.

Here it’s all about drawing, I focus on nothing else as this is the most important stage. I would like to have the figure not flowing off the side, but I always tend to make the figure too large, one issue that I’m trying to correct.

Now we’re getting into the fun part. The drawing is done and should be very close to accurate, so I begin defining the shadow areas and blocking them in, while at the same time refining the drawing if necessary.

Adding more darker values to the shadow area here. One thing I noticed is that the page is so white that I can’t judge the shadow values well at all. I ended up going back into them later and making them darker after all the white of the canvas was covered.

Considering it’s so hard to judge value and color when it’s next to white I blocked in the background quickly before adding the light area of the skin.

Just one single tone for the light areas, I still refine drawing in places and I do adjust the light area value a bit if I don’t want to lose some drawing like in the face.

Compared to the model, my figure turned out much too yellow, something is holding me back from using a bunch of white but clearly in this photo I need to dip into the white much more than I thought.