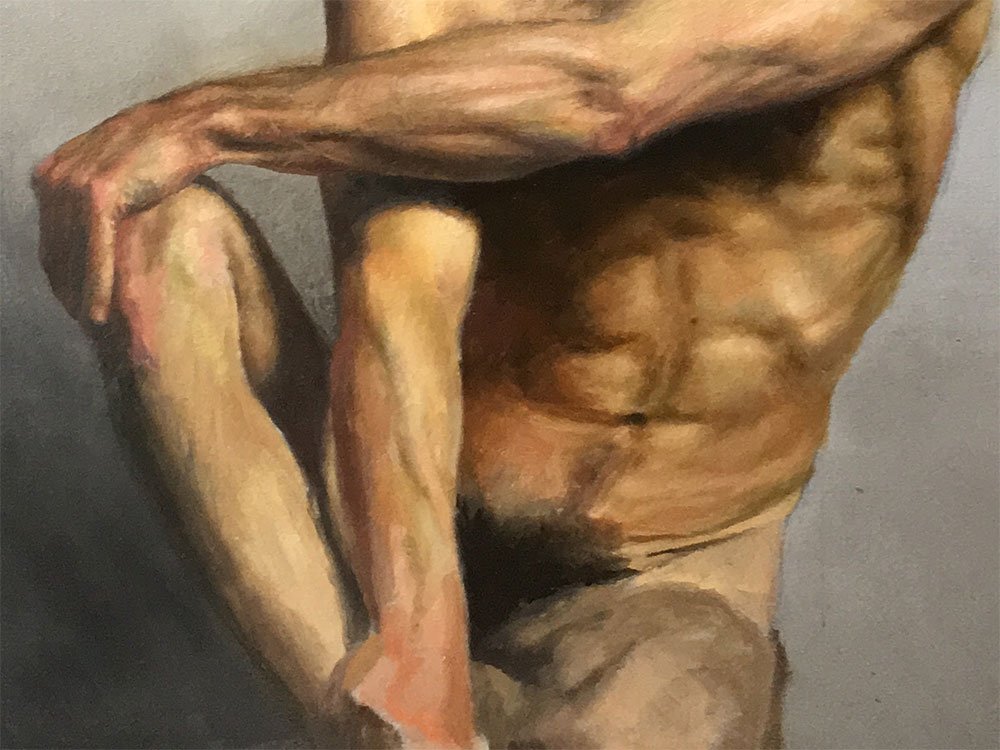 I didn’t get a lot of painting done on the figure today because I focused for the first hour on color tests.

I actually used Daniel Greene’s palette as inspiration for most of the mixtures. But, the colors I use are different than his so obviously I couldn’t copy it exactly. My palette is also much smaller with not near as meany colors.

My palette currently consists of:

My first mixture was Cadmium Red Light + Transparent Earth Orange. I was surprised at how nice this mixture was. It is a bright red but subdued enough for those parts of the figure that are usually red, like the nose or ears. I then tinted it with flake white to get and idea of how it would transition from its darkest value to lightest. Then I surrounded it with some other reds, Cadmium Red light + flake white (on the right), and Transparent Earth Red + Flake White below. I still feel that this subdued red is much too bright to work well with natural skin tones but it is a great pile of color to start with

The next round of mixtures were not so successful. I tried to mix up my own yellow ochre, I do have a Gamblin yellow ochre but I hardly ever use it but I did add some to my palette to test. I was able to mix a close approximation to yellow ochre with TEO + FW + CRL + SG, yeah, basically a bit of all the colors. But once I had a mixture on my palette and tinted it further with flake white it was all too yellow. I tried it on the painting and it was surprisingly bright, an unnatural yellow. I ended up mixing some TEO + FW and this was a much easier mixture that got close to a base skin tone that could be moved more warm or cool easily.

The most successful of the mixtures I made were the darks and grays. Both darks are a mixture of Alizarin Permanent + Sap Green, but the top one has much more AP and the bottom has much more SG. Then I tint both of them with Cadmium Yellow Medium. Both of these were very nice transparent dark tones that I used to subdue all other colors either closer to green or closer to red.

Then I mixed a gray that was primarily Sap Green + Cadmium Red Light. The gray worked wonderfully for those areas of skin that tend to get a more blue cast when close to veins. It was also around this time that I became annoyed at the strength of the Sap Green. This color I have to use very carefully, it is so strong that it seems to take 10 time the amount of another color just to effect it. It works slightly better with CRL because it is also a strong color.

At the end I have decided that I will mix the following on my palette at the start of each session at least for this figure.

With these colors I feel I can achieve all that I need for this current figure. Although I don’t think I will ever use any of these mixtures straight on the canvas. Each one will be mixed with others to either brighten them, dull them, warm or cool them. By no means does this relieve me of the necessity of mixing paint but it does help me along the way.