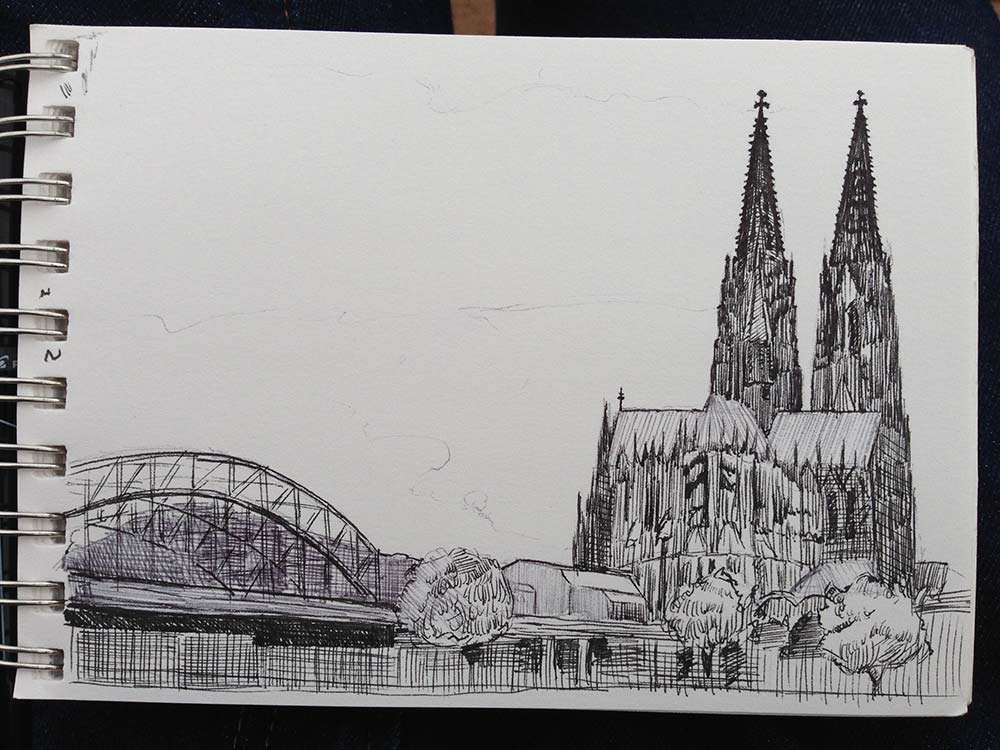 Today was spectacular I got the one in a lifetime chance to view one of the most magnificent buildings on the planet, the Cologne Cathedral in Cologne German. I’m most acutely away of what a terrible writer I am when I try to describe and experience as breathtaking as this one, bare with me as I try in vain to describe what we witnessed on this day.Our first view of the cathedral during the tour and immediately your dumbfounded at the immense size of the structure. Then the more you look at it you begin to notice all the minute details and the mind blowing amount of work put into the exterior sculptures and carvings. 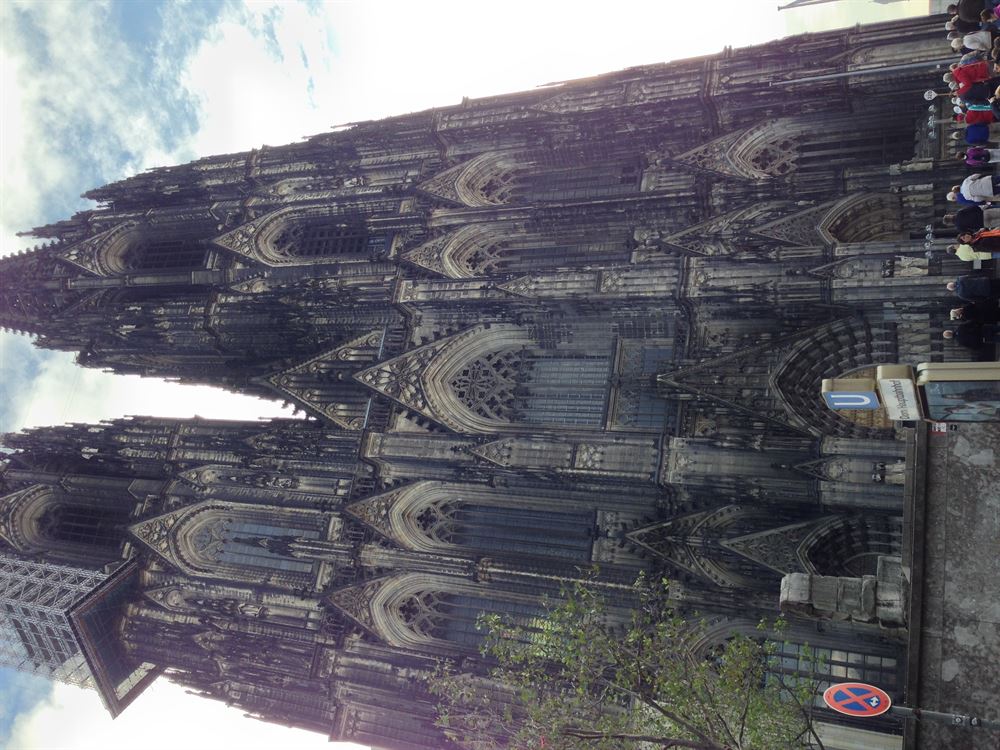 Photos really don’t do it justice, here is a vertical panoramic picture of the cathedral but still we couldn’t capture its size. 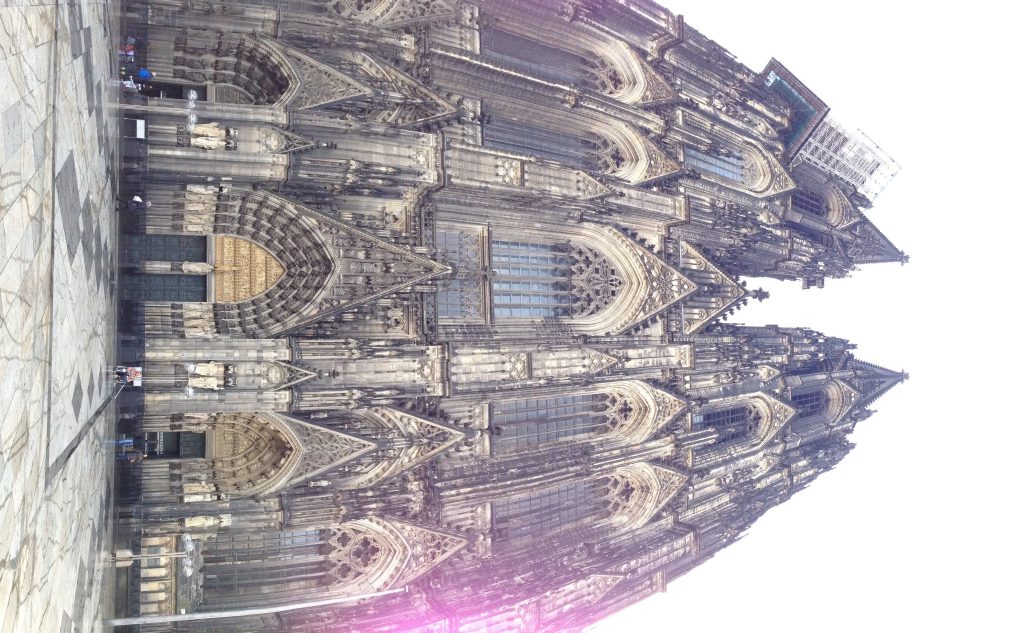 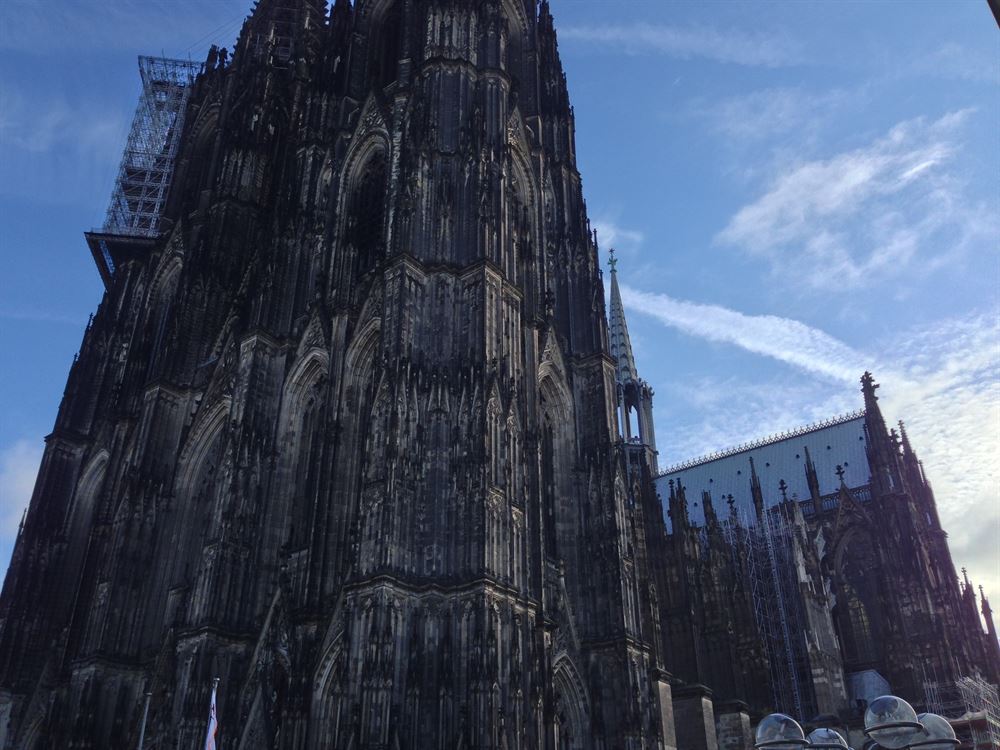 At this point we were doing a walking tour outside the Cologne Cathedral with a tour guide and she was talking about all the rich history of Cologne. Including these “Stumbling Stones” that were placed in front of particular businesses throughout the city. The stones at one point were raised in order to cause a person to stumble over them and take notice. Because on the stones are engraved names of jewish people who owned the business and worked in Cologne before being taken to concentration camps during world war 2. I was one of the many sad reminders of the bloody history of Germany. 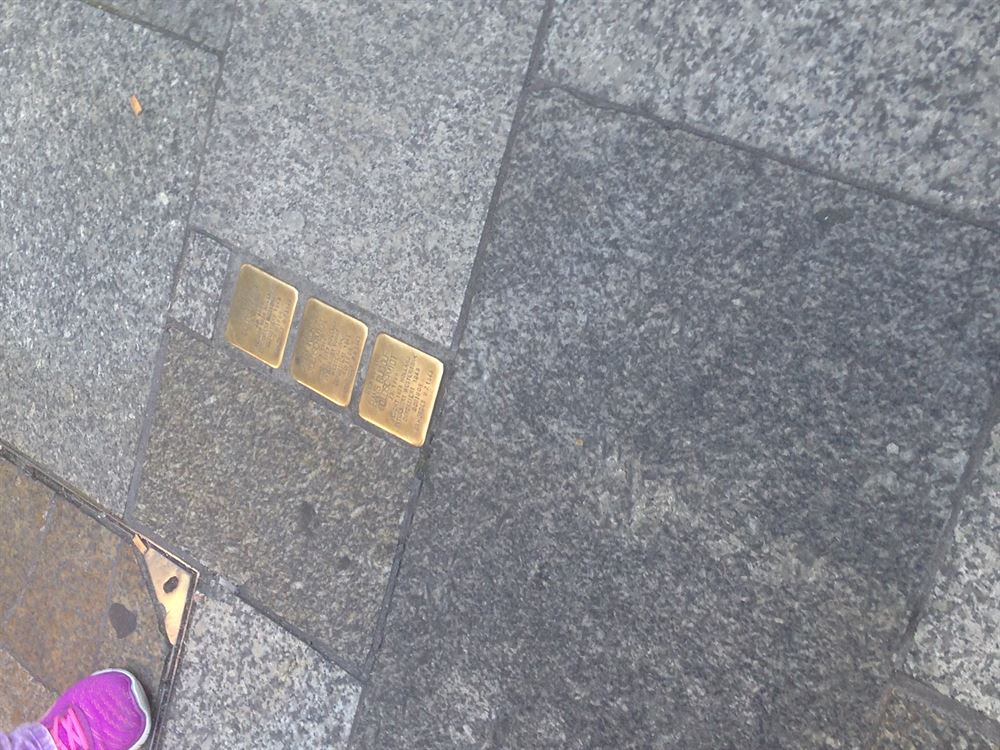 Luckily during world war 2 the Cologne Cathedral was spared and remains standing today. But there are many pictures of Cologne Germany where nothing in the city is standing but the cathedral. Evidently most of Cologne was bombed to rubble in the 1940’s. 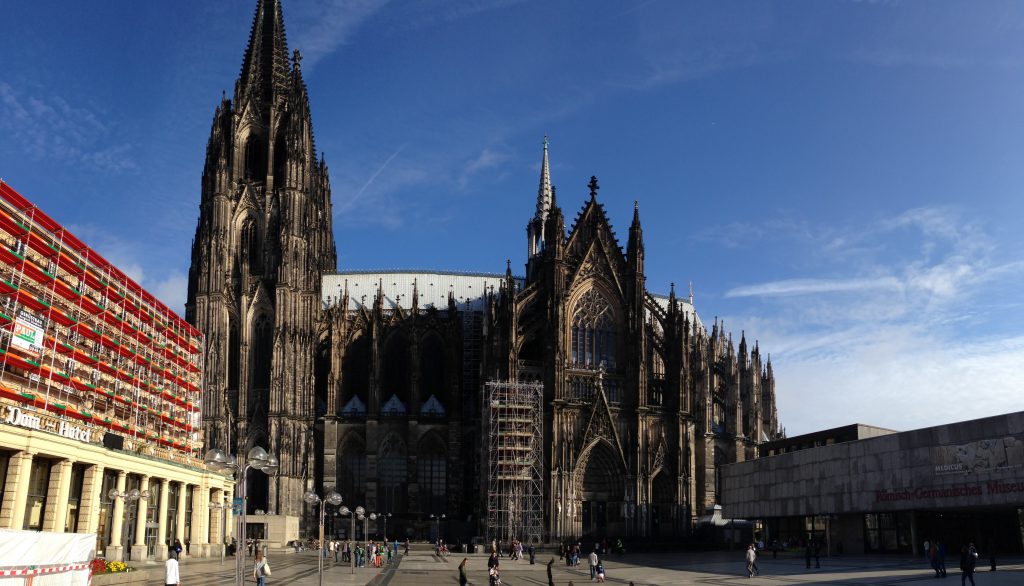 Construction of Cologne Cathedral started in 1248 and was halted in 1473, leaving it unfinished for 300 years. Work restarted in the 19th century and was completed, to the original plan, in 1880. It is 144.5 metres (474 ft) long, 86.25 m (283.0 ft) wide and its towers are approximately 157 m (515 ft) tall. The cathedral is the largest Gothic church in Northern Europe and has the second-tallest spires. Its two huge spires give it the largest façade of any church in the world. 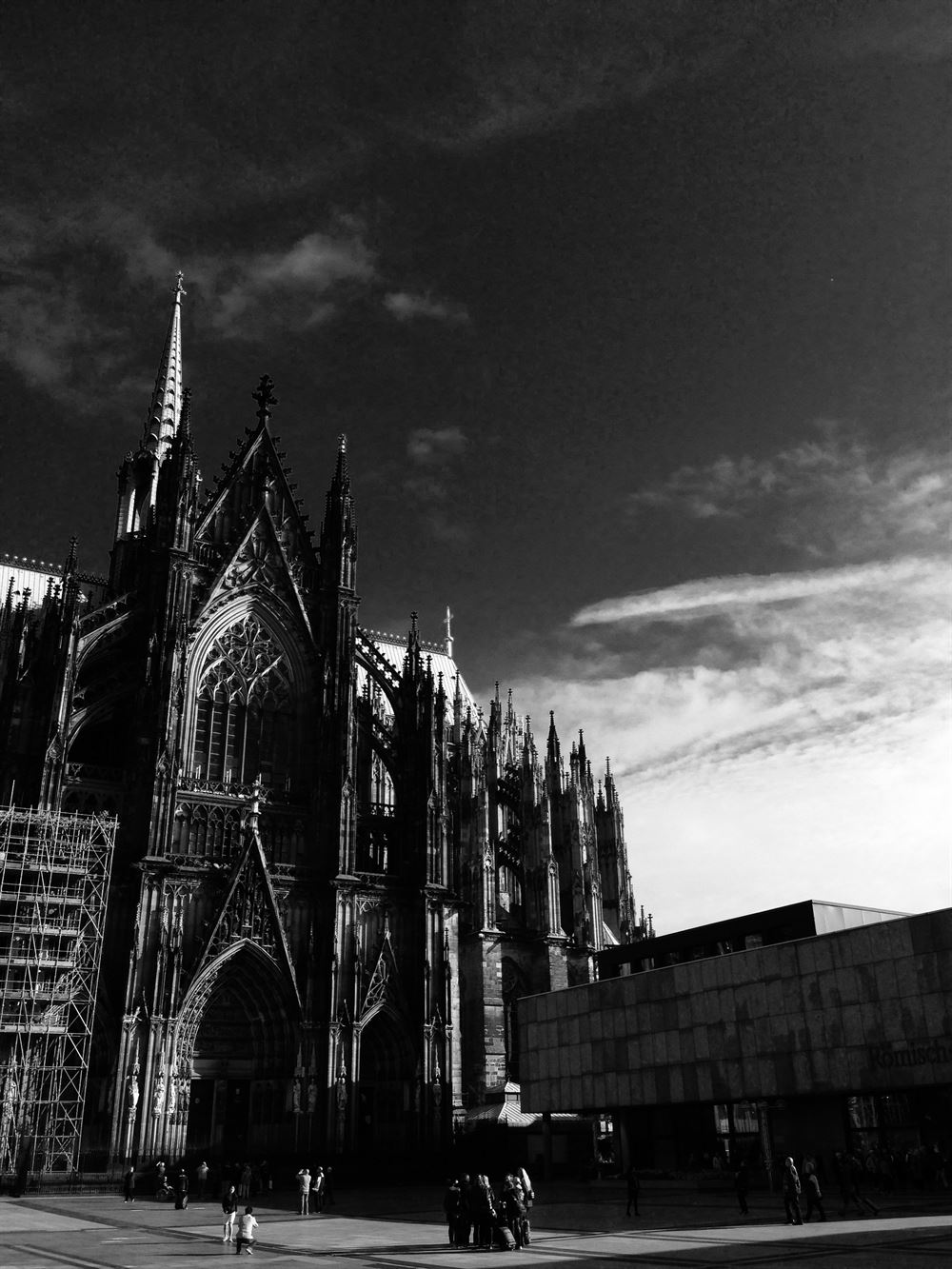 There is so much artwork outside of the cathedral and inside that it would take days to see everything.

Luckily I was able to capture the bells ringing in the cathedral while we were there. 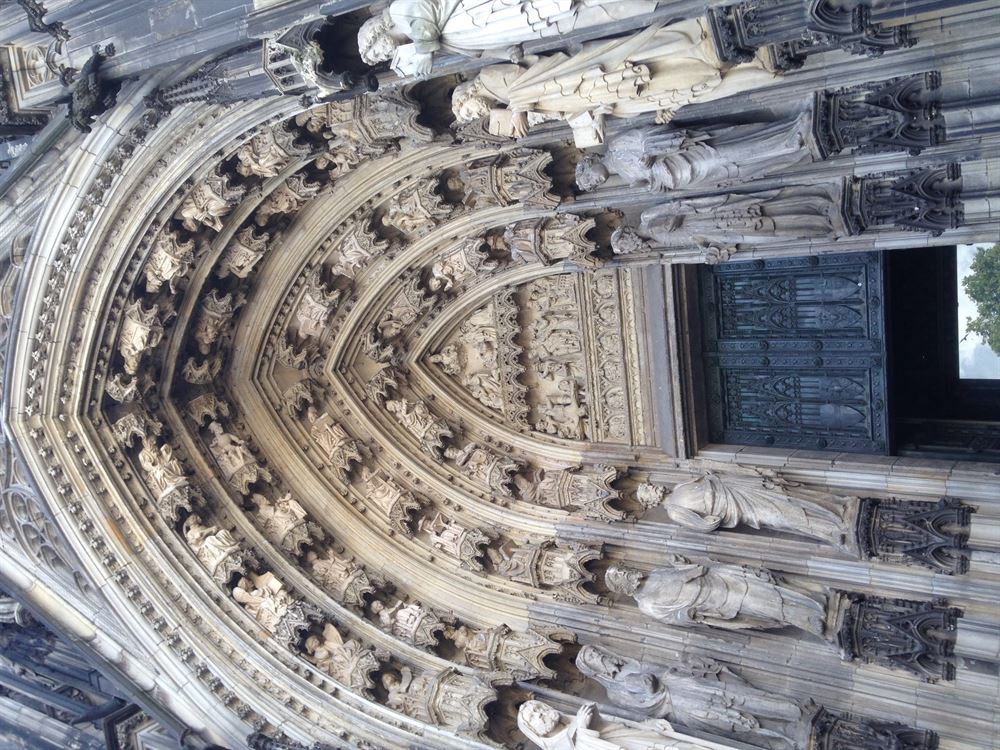 I thought the outside was spectacular until we were able to go inside and I was again blown away. I have never seen an interior so massive and beautiful that it has its own atmospheric perspective. 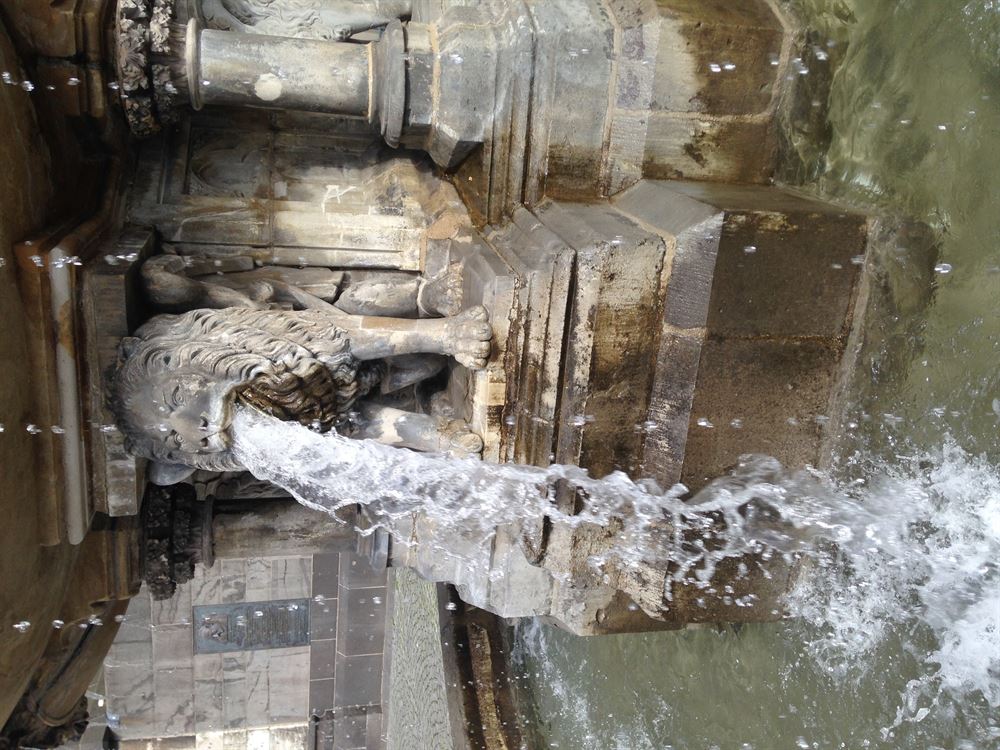 We loved all the gargoyles around the cathedral. Every single one of them was different. We say men, women, demons, goats and all kinds of different creatures. 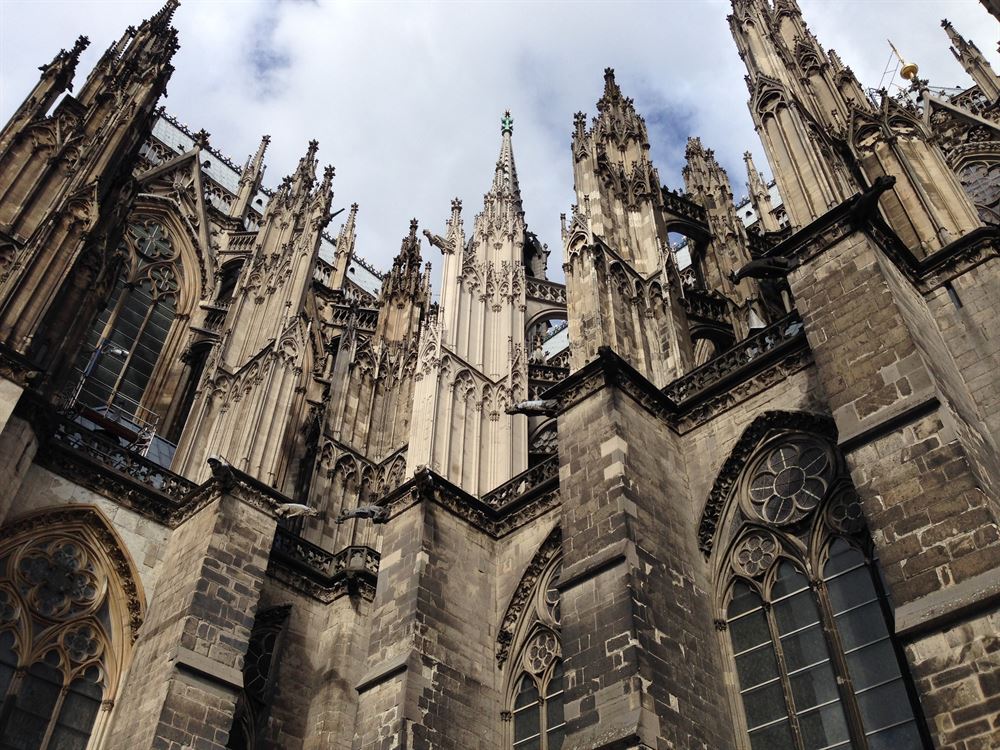 After the tour ended we decided to walk back to the ship over one of the cologne bridges where we saw the european pass time of showing your love for someone else by inscribing your initials on a lock and attaching it to a bridge. The idea is you add your lock to the bridge and throw the keys into the water to signify the binding of your love forever. As you can see there were a few hundred thousand locks. At one point a bridge in France had to start cutting the locks off because the bridge became too heavy and unstable. 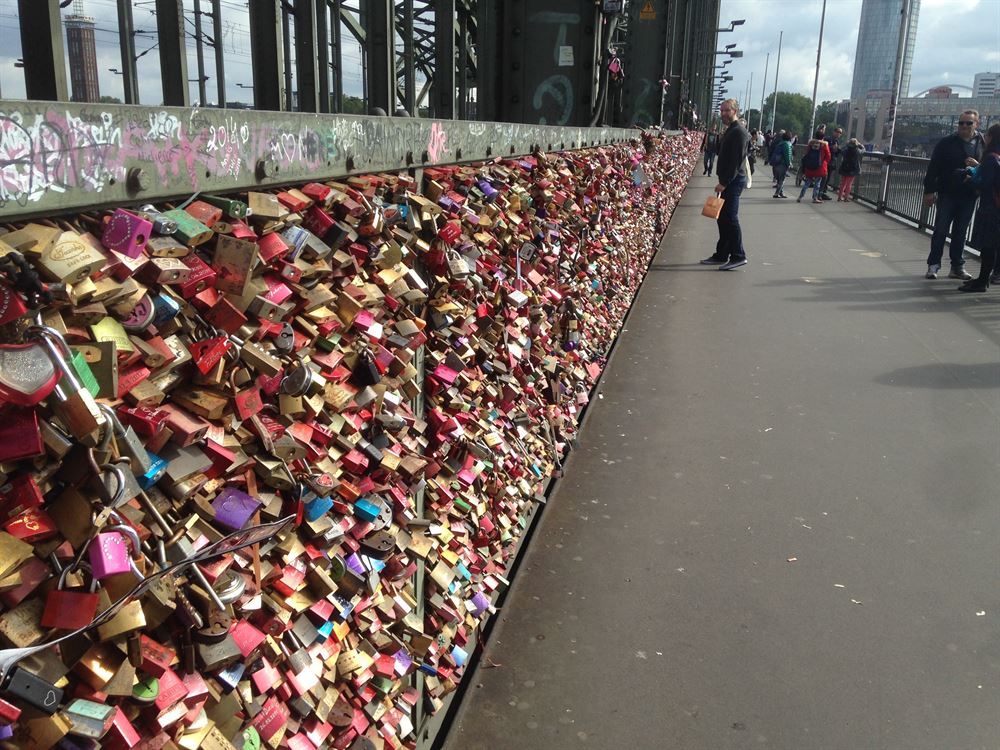 After lunch we walked back into the city to see the inside of the cologne cathedral because at this time they were not having mass and it was open to the public for viewing. 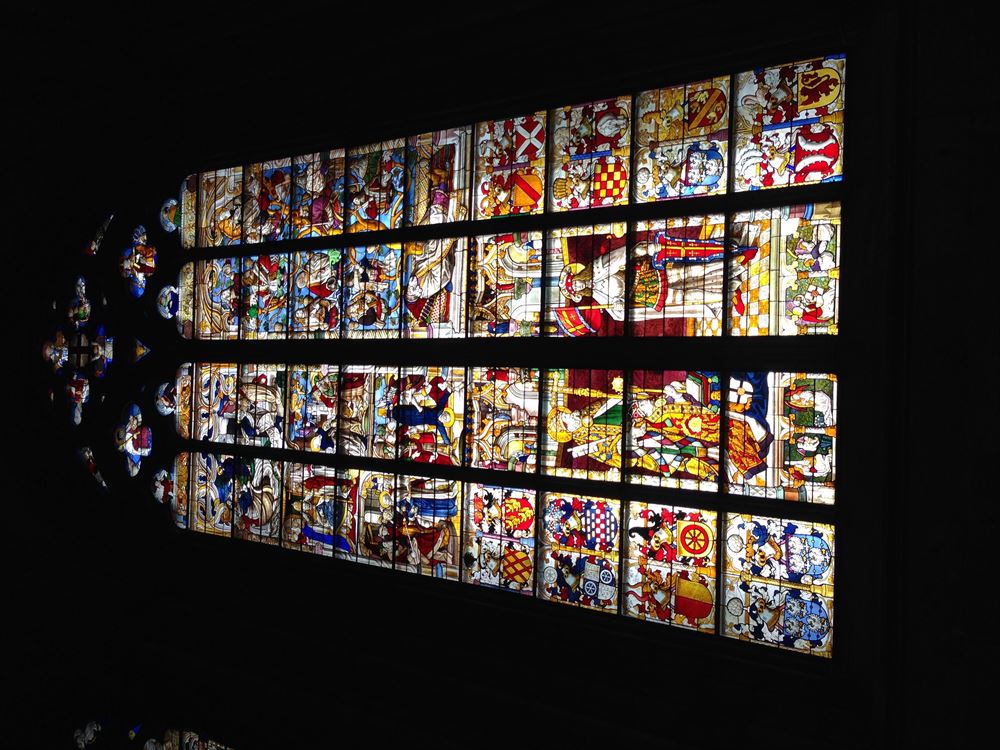 Massive stain glass windows throughout the cathedral were spectacular. During WWII they pulled all these glass windows out and stored them so they wouldn’t get damaged, which was an amazing feat once you say just how immense a task it was. 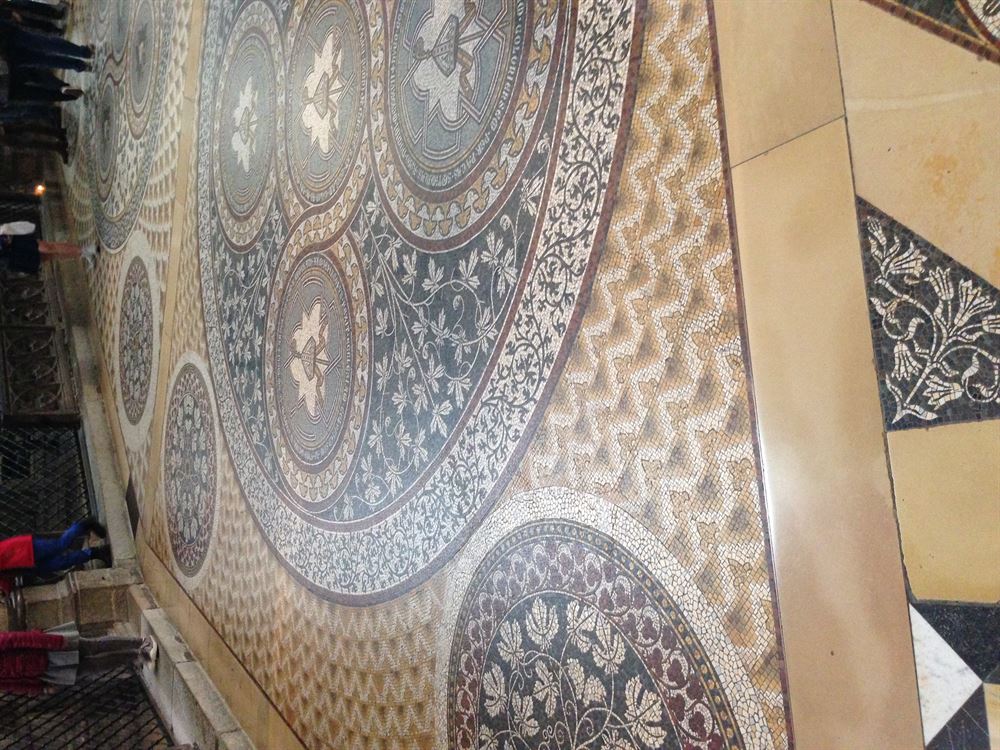 Every inch of the cathedral was adorned with some amazing artwork. You could point your camera in any direction and see hundreds of years worth of artwork including the floors. 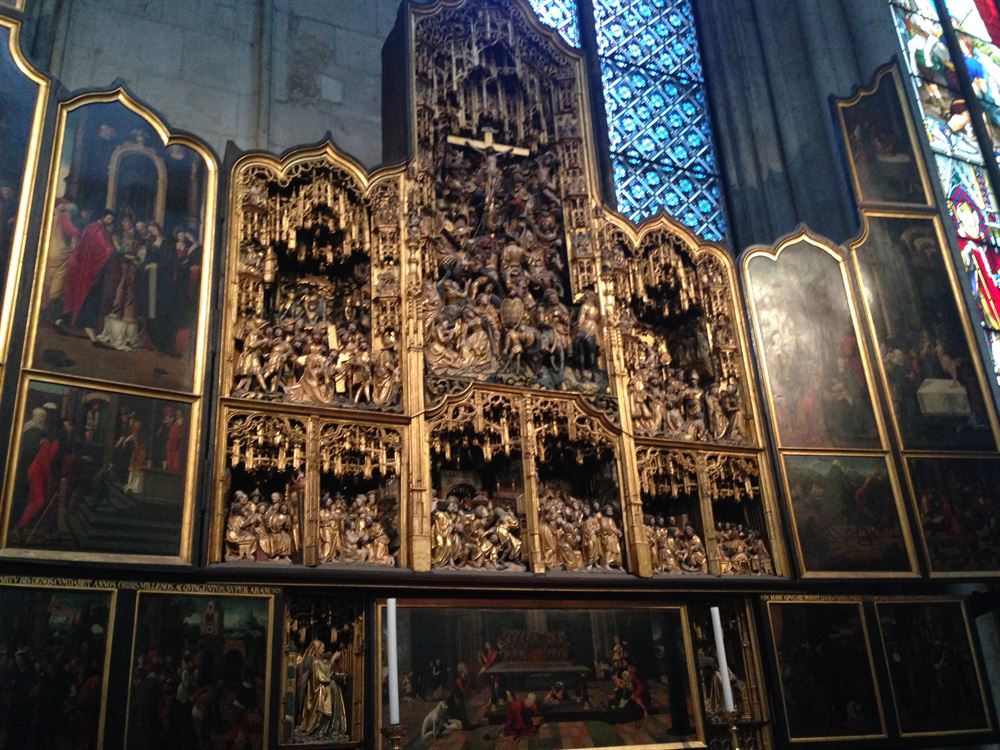 Just one of the many alter pieces throughout the inside of the cathedral. I can’t put all our photos on here the post would be too huge. I literally took hundreds of photos here.

After seeing as much of the cathedral as possible I decided to check out one of the local museums. So I went to the WALLRAF-RICHARTZ-MUSEUM. It houses an art gallery with a collection of fine art from the medieval period to the early twentieth century. The museum was small and didn’t have any a ton of work but the separation from medieval work to early twentieth century was nice.

I wasn’t too interested in the medieval works so I breezed right through that gallery, then took my time looking at the amazing work from the Baroque period. The I was surprised at how I was much less impressed with the early twentieth century works. Honestly when I was looking at impressionists work I felt like I was looking at a regression artistic skill, I kept wondering if people just forgot how to draw. Yes, I know they were focusing in something much different but still, I was disappointed. 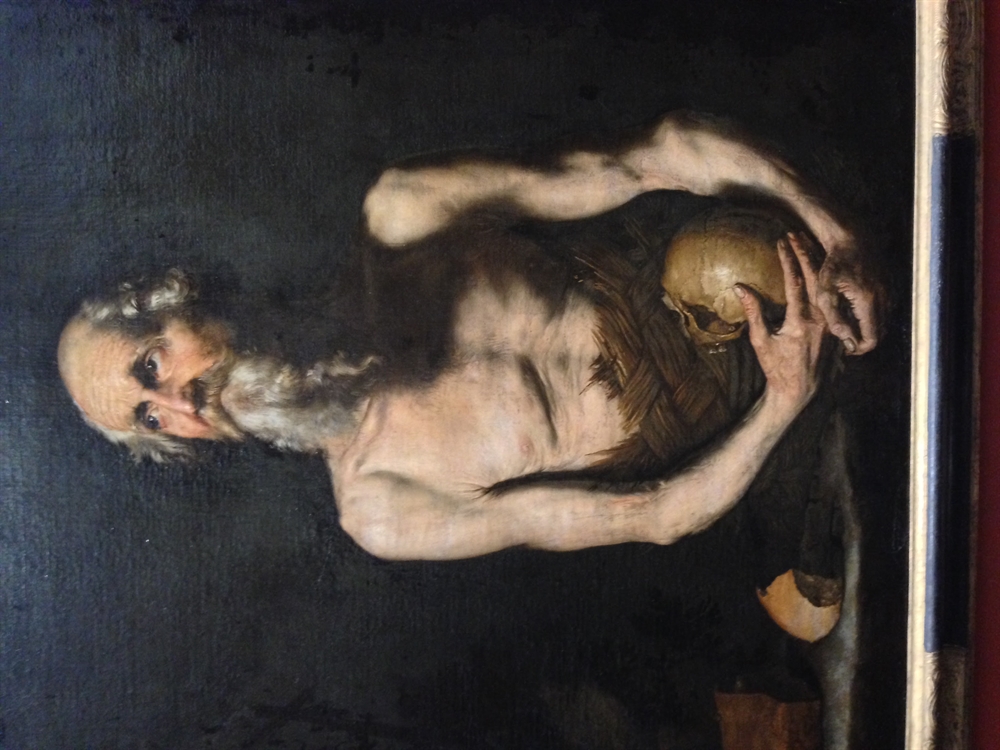 I think this marks an interesting shift in my art preference. Just look at this work by Jusepe de Ribera of St Paul the Hermit done in 1647. There is as much passion here as in any later work plus it shows a definite mastery of the craft. 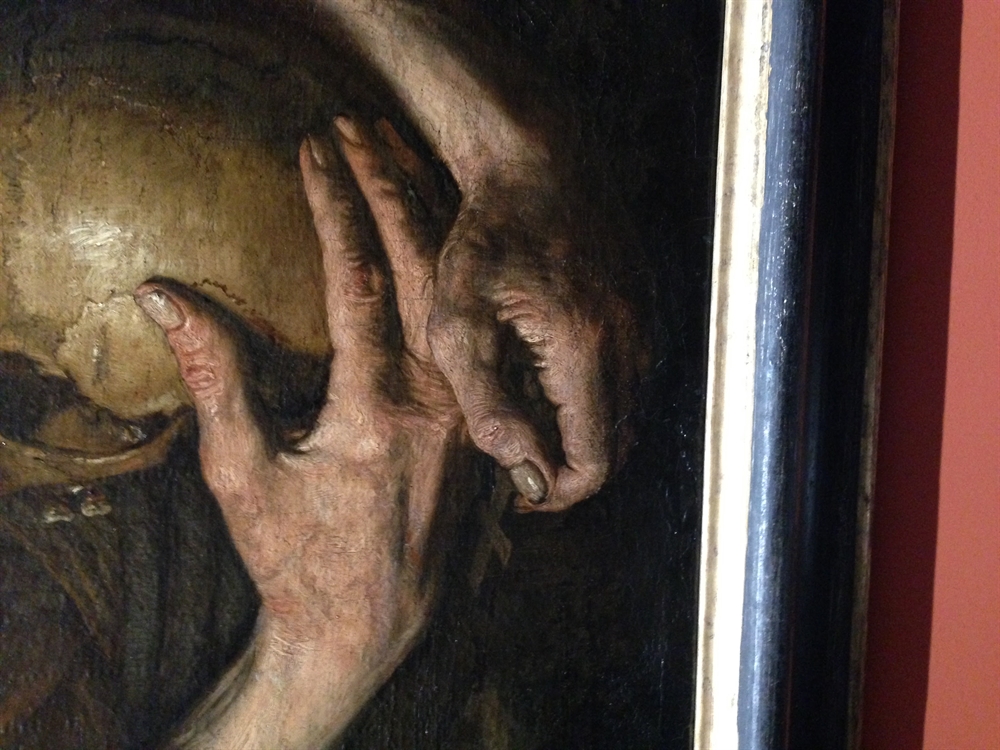 Once done with the museum I again returned to the ship and began my drawing of the Cologne Cathedral and its cityscape. 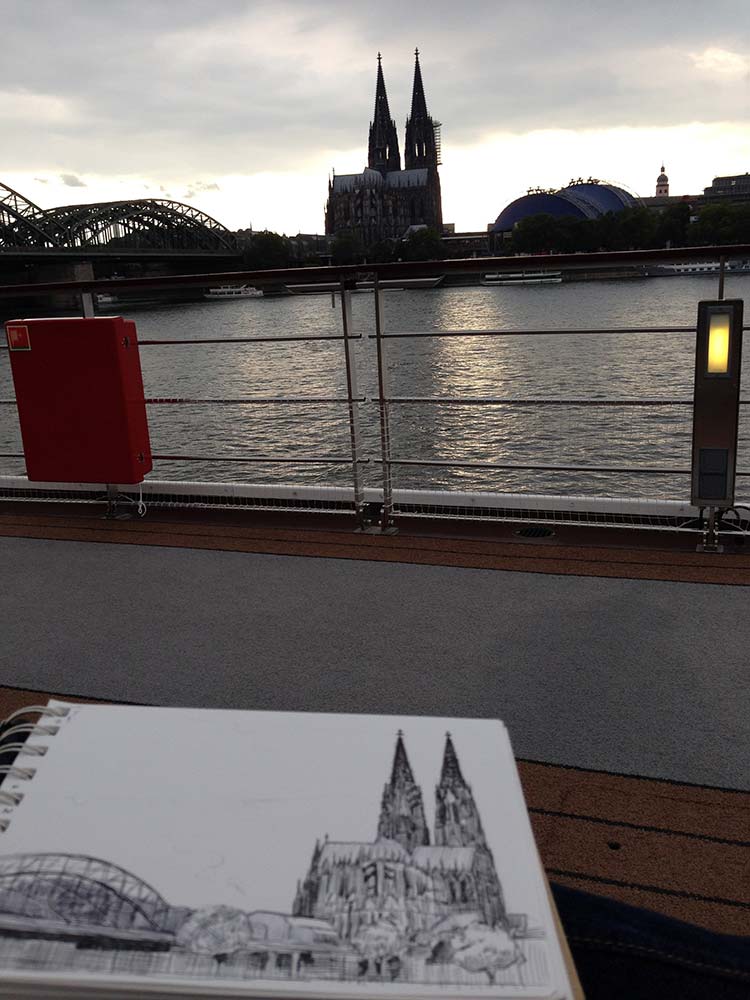 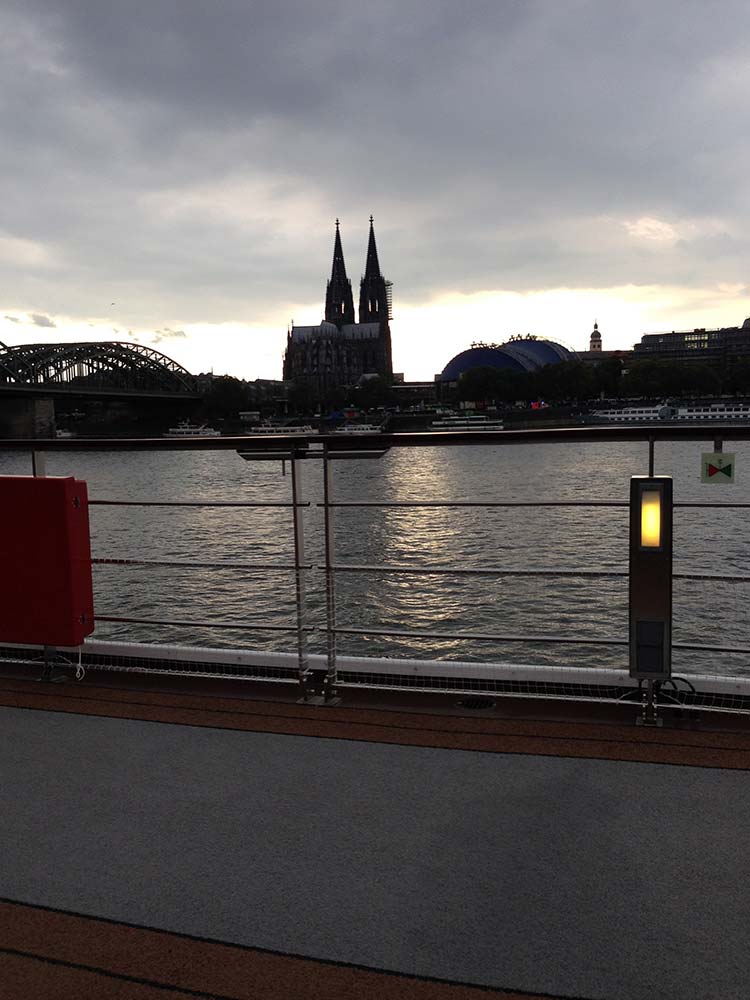 Here was our view from the dinner table, I couldn’t stop taking pictures of this. 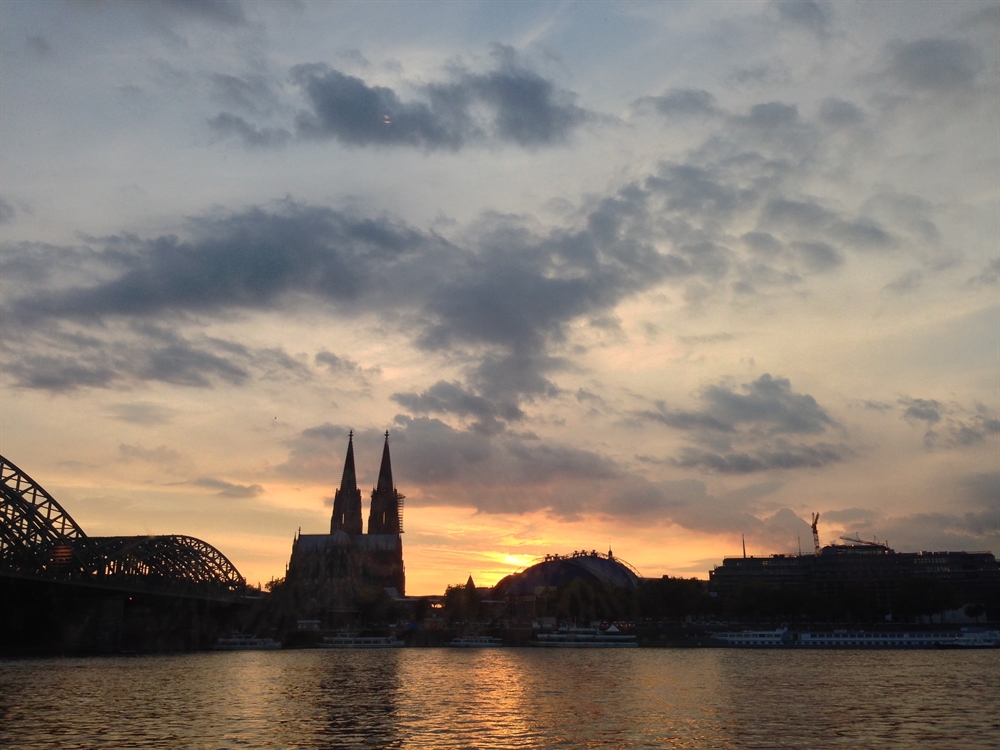 And at night the lights came on to light up the cathedral. For a while we were thinking the lights were going to be off all night. There was some political strife happening in cologne and the cathedral owners was showing their disapproval of the situation by keeping the lights off, but we were lucky tonight. 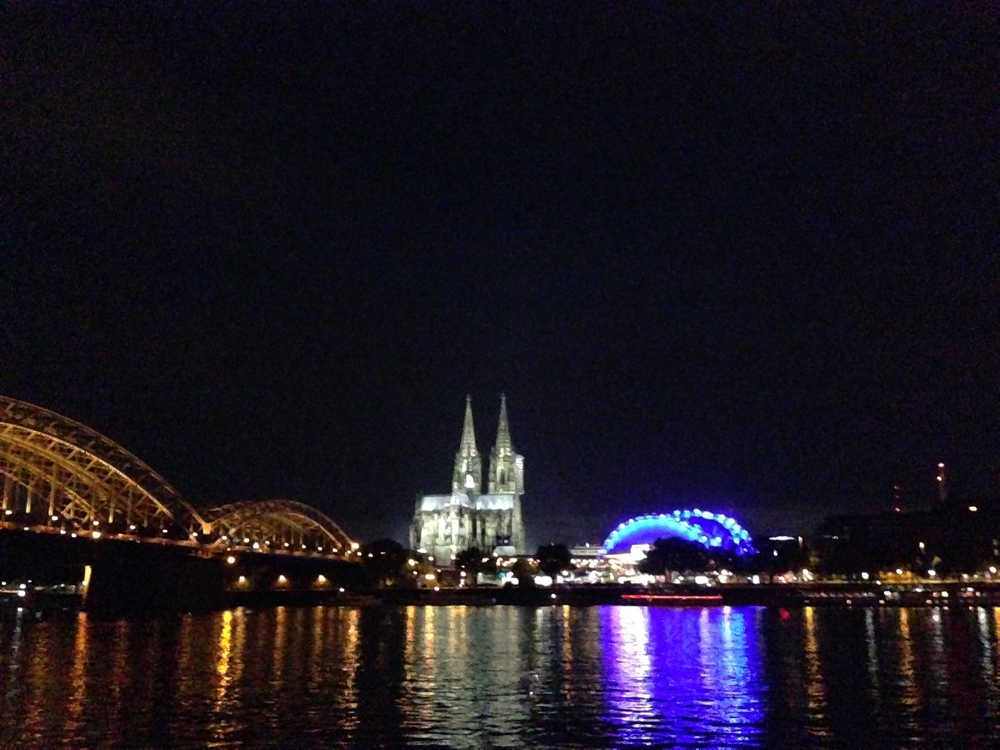 Here I am at one of the entrances of the cathedral. I really liked how the lights below gave everything this eery look. 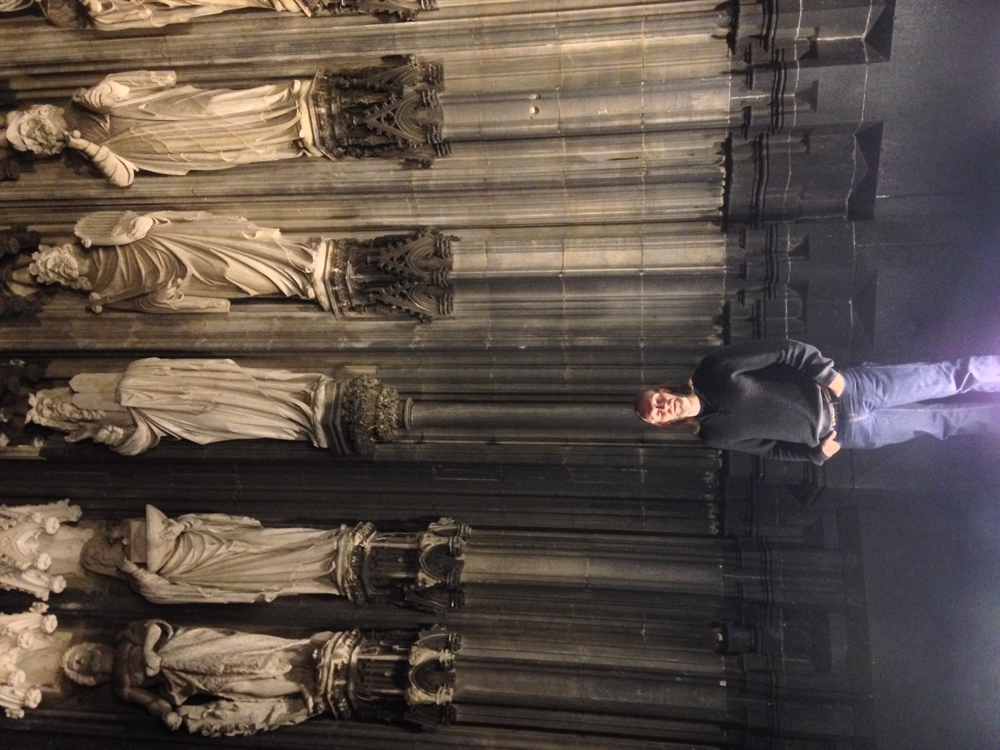 To complete a wonderful night Pattie and I attached our own engraved lock to the bridge and threw the keys in the water. If we ever return to Cologne Germany we are going to have a tough time trying to find our lock again. 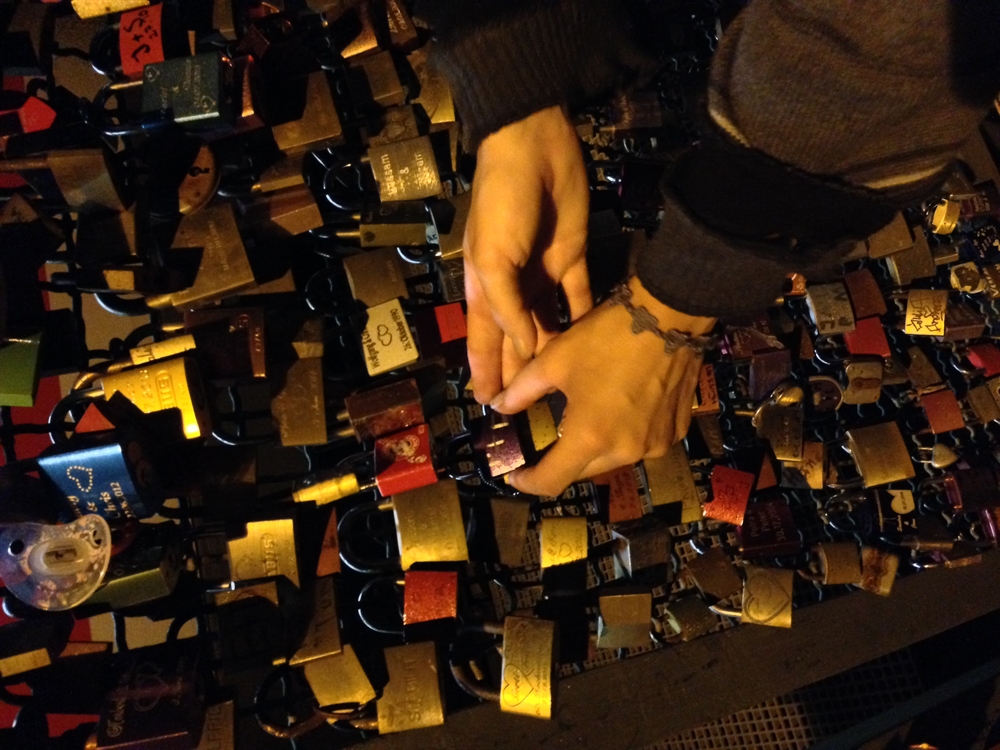