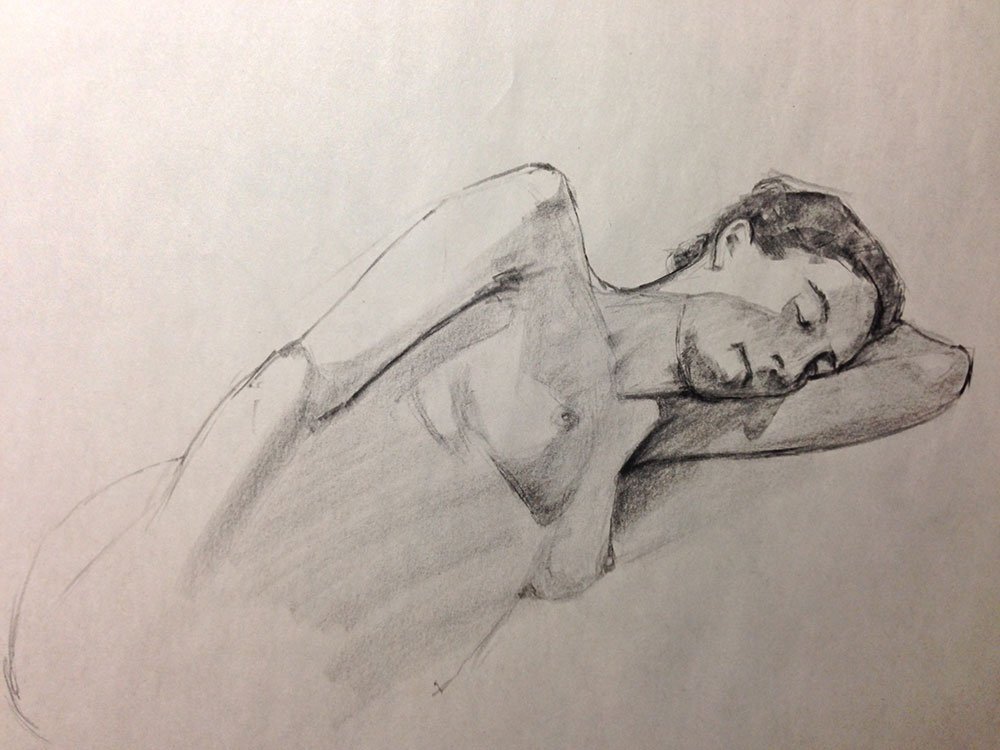 I can count on one hand the amount of times that I have had a predominantly good life drawing session, but today went surprisingly well, I like almost all of the drawings I did today.

My warmup page looks like a bunch of gibberish but I assure you most of the lines here have a purpose.

I actually pulled off a few good gestures today. I have been struggling with gestures for a while but most of these actually have the full figure and describe the movement very well.

5 minutes on a figure drawing is not a lot of time at all but when you go for 5 minutes after 1.5 minute gestures it seems like a long time. I was able to get some very accurate drawing done on all three of these poses, and even some value on one.

This may be the best drawing of the night. Sometimes I just “see” the pose perfectly. I guess I should say that I understand the pose perfectly. It’s hard to explain but some poses are much harder than others than there are positions of the body like the one above where I know before I even do the drawing that I’m going to get it down well. This was one of those poses.

I’m still on a roll, this was a hard pose, not like the one before it. Front facing poses are always the hardest for me. This is not the best drawing of the day but it’s not that bad, so I will chalk this one up as a win.

This 30 minute pose was really odd. The model was clothed for this one so as usual I focused on the portrait. But throughout the pose the model had a very sad expression, in a couple instances I thought she was going to start crying. It was quite awkward, I mean what could anyone do in this situation but try and capture the sadness in the face. I didn’t get much drawing done because I kept trying to capture the emotion on the face. Unfortunately, I failed.

I’m not really happy with the lighting in this studio. Don’t get me wrong it’s a great studio but there are so many artists attending that Hipbone has to light the model from two sides so everyone in the room will get light on the model. The issue is that the dual lights kill the logical progression of light to dark on forms. In this instance though, I was having a great time drawing the differences in value on the models face, the cast shadow from the head on the arm and the subtle changes in the shadow areas.

Even the last pose went well, I focused more on a portrait here, It’s not very often that I get a perfect profile.