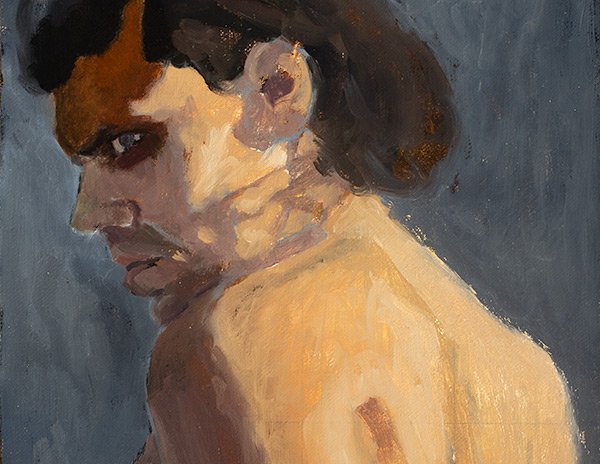 For the beginning of my art session this morning I chose to work on the Rajiv One painting again.

The first thing I did was try to match the colors of the shadow side of his face. The problem I’m having is that there is not one clear hue/color for any part of his face. And I believe this to be true for any figure.

I’ve decided to pick out several different tube paints that have as close of value and hue as different parts of the shadow area in his face. For example raw umber matches the value of the shadow underneath his eye, ivory black matches the darkest values in the shadow of his face, quinacridone magenta matches some of the lighter values in the shadow of his face. But none of them have the exact hue that I need. But the combination of all three plus some transparent earth orange would allow me to produce the hues that I see.

So basically I’m not mixing one color that I will use throughout the shadow side of his face but preparing my palette so that the mixtures I make on the fly will be a lot closer.

That idea worked to a point. Then I was finding all these colors close in value hard to judge so I began mixing some colors and testing them with the image. That got me closer. Unfortunately I’m still finding it super hard to judge any of the colors for the shadow area of this painting. It’s a challenge I’ll have to rise to.

What went well, what was awesome! Celebrate It!

What needs work? What did you learn?

Figure out how to judge the shadows.

How am I going to Optimize moving forward?

Focus on only the shadow side for tomorrows session and get it right. Write it all done.

Communicating practical wisdom to empower creators and help them improve the world with their creativity! Join CreateQuest at the beginning of it’s journey!